(Clearwisdom.net) On January 25, the first show of the Chinese New Year Spectacular in Chicago was presented at the Arie Crown Theater. Before the show started, the reporter briefly talked with Anna Bukowski, who works at the Argonne National Laboratory. Anna came with her husband Macieg and her cousin Irena Pulka. They are all Polish immigrants. A Chinese colleague of Anna recommended the show to her. 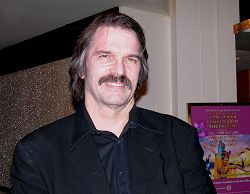 Randy Soard is an artist, and is associated with a group called "Nevada Arts Advocates." This group educates school children and encourages them to participate in music and the fine arts.

Las Vegas Publicist: "I think it's a great show!"