Writer Yuanshen Chen: I Was Moved to Tears while Watching the Chinese New Year Spectacular (Photo) 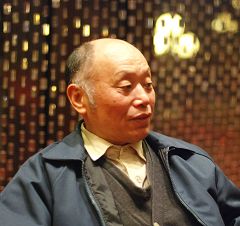 Mr. Chen said, "This show presents the essence of China's 5,000-year-old culture. It was very touching. Upon seeing the scenery of the divine world, I was moved to tears. This show brings the genuine Chinese art to the world. I expect the Divine Performing Arts to become more and more popular and successful."

Mr. Chen said, "I have not seen such an excellent arts performance in China for decades. I saw something like this when I was small. After 1949, our children had no chance to see this. Thus, I suggest that all Chinese people watch it. It is genuine Chinese art."

Mr. Chen was also moved by the performances about Falun Gong. He said, "The program that impressed me most was the dance performance about Falun Gong. It was very moving when the woman practitioner of Falun Gong, who was beaten to death by the Chinese Communist Party, was accepted into Heaven by divine beings. Actually, the Falun Gong practitioners are very kind people. If all people were Falun Gong practitioners, there would be no need for police since everyone would follow Truthfulness-Compassion-Forbearance. The CCP's persecution of Falun Gong is wrong. The Divine Performing Arts presented the situation for the world's people. It is great."