Harvard Medical Professor: "I Liked All the Performances" (Photos)

Raj is a medical professor at Harvard University. On January 12, he came to the NTDTV Chinese New Year Spectacular with his wife and four friends. Raj told the reporter that the show was amazing and he liked all the performances. He had never seen a show that was so beautiful and graceful. 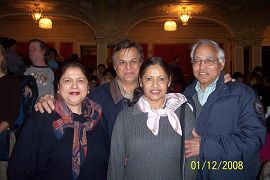 Raj, his wife, and his friends

Prem, Raj's wife, commented, "The show was beautiful and colorful. It was perfect."

Biha and her husband, Raj's friends, said the show was excellent and the young actors were outstanding. They enjoyed it very much, because it demonstrated the Eastern culture. 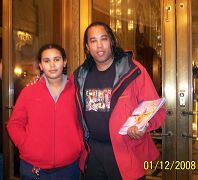 Daniel Turner and his daughter

Mr. Daniel Turner is a mental health worker. He and his 12-year old daughter came to the show on January 12. They were both amazed by it. Mr. Turner said the show was "magnificent and wonderful." To him, it was a very unique experience of tasting Chinese culture, dance, music and costumes.

He said the costumes were beautiful and the stories told by the dances were touching. He liked historic and religious stories, so to him, the show was a wonderful experience. Mr. Turner condemned the persecution of Falun Gong. He said he could sense the suffering of Falun Gong practitioners. He thinks that the international community should take action to stop the persecution. Mr. Turner admires the people who sacrificed their lives for their beliefs. He hoped the Chinese people would have freedom of belief soon.

Mr. Turner and his daughter said "Happy New Year" in Chinese to the reporter before they left, which they had just learned from the hosts of the show.

“Ottawa, Canada: The Chinese New Year Spectacular in the Eyes of Scholars (Photos)”

“Montreal: Divine Performing Arts Displays "What China Used to Be Like"”