The seventh Asian Festival and Dragon Boat Competition in Connecticut was held at Riverfront Plaza in Hartford, Connecticut. Falun Gong practitioners attended this festival and had a booth to clarify the truth about Falun Gong. They also demonstrated the exercises, played the Erhu, a traditional Chinese stringed instrument, and performed traditional Chinese dances on the stage. Many people were attracted to the performances and some of them learned the exercises. 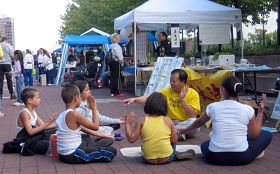 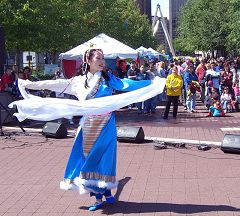 Many people were attracted to the traditional dances performed by practitioners