On September 23, 2007, Falun Gong practitioners from Japan were invited to the International Fair in Tokyo. Practitioners demonstrated the exercises and brought the beauty of Falun Gong to the public. 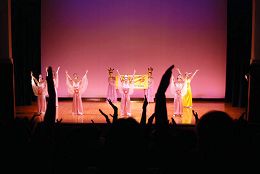 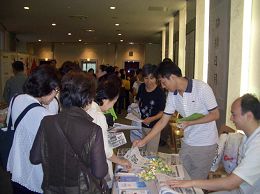 Many people from different countries attended the fair, including businessmen from China and Taiwan.

Falun Gong practitioners had a booth at the fair. They displayed truth-clarifying materials and copies of the Nine Commentaries on the Communist Party in different languages. Many people, including Chinese businessmen, came to the practitioners' booth and accepted the materials.

In the afternoon, practitioners held a one-hour-long performance. When they were demonstrating the exercises, eighty percent of the audience followed the movements along with them. Practitioners also performed songs and dances and played traditional instruments.

After the fair, practitioners passed out truth-clarifying materials and gave many attendees a paper lotus flower with a Falun Gong bookmark.