The New York University Chinese Students Association recently published a statement attacking the NTDTV International Chinese Classical Dance Competition, bringing attention from all circles. Why would they do this? Why purposely cause damage to the grand event of promoting Chinese classical culture in international mainstream society? What's the reason behind it? This reporter interviewed Dr. Ye Ke, who was the chairman of the Southern California University Chinese Students Association in 1998 and 1999. 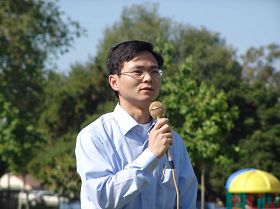 Dr. Ye Ke pointed out that such behavior by student association leaders is a stain on their reputations, and will make it difficult for them to later gain a foothold in a free society. He hopes Chinese students can distinguish the difference between loving China and loving the Chinese Communist Party (CCP). He cautions them not to be used by the Chinese Consulate. He also said the student association should be an organization that serves students, not foreign governments. Statements made by several student leaders under control of the Chinese Consulate can't represent a broad range of students and scholars.

The following are statements from the full interview:

Dr. Ye Ke, several days ago the New York Student and Scholar Association issued a statement that attempted to block the NTDTV International Chinese Classical Dance Competition. What are your thoughts on this?

This was unexpected. Although the Student Association is controlled by the Chinese Consulate, that they would publicly slander in this way, so much over the limit, makes me surprised.

Why are you surprised?

The pattern of the entire statement is quite low, completely the view of the CCP in taking a political stand and generating political battles. That such posturing would exist on a US campus is highly unimaginable. Why would they say Falun Gong is a [slanderous word omitted]? It is absolutely the CCP's set of excuses. What qualifications do they have in declaring that the Chinese students of New York University refuse (to accept) Falun Gong? Possibly many students themselves or family members, or friends practice Falun Gong, do they know of Falun Gong? How can they say the persecution of Falun Gong is supported by the entire society? Practicing Falun Gong is voluntary; tens of millions of people practice Falun Gong and do not agree with the persecution. At the beginning of the persecution, six out of seven members of the standing committee of the Politburo were against the persecution. Do the students know about this? They did not do research (into this matter), and just copied the CCP's political wording.

As a student association, issuing such an article-this really makes people feel distressed. These behaviors will leave a stain on the students' lives.

Can you explain why you feel distressed for the New York students controlled by the CCP?

I myself worked for the student association before, so I understand their mindset well. [...] This is the consistent technique of the CCP-creating fights among the populace. I hope the student leaders do not cause hatred and battles among Chinese, and harm each other under the instigation of the Consulate.

The CCP does not equal China. The great China has several thousand years of history; however the CCP only has a few dozen years, what does it count for? Maybe someone thinks criticizing the Communist Party, especially if he is a Party member himself, is like criticizing himself. As a matter of fact, if you have read a bit of history, they would know what kind of disasters the CCP has brought to China. Look at the disintegration of the Communist regime in East Europe, look at Europeans' reconsideration and condemnation of the Communist dictatorship, look at the completion of the Victims of Communism Memorial. Actually we can see that justice is fair; the crimes committed against people by the Communist Party can't escape history's eventual judgment.

If these people still do not understand what the CCP has done, then I would ask them to read the Nine Commentaries of the Communist Party. If they do not believe the persecution suffered by Falun Gong, I shall recommend them to read the third open letter written by attorney Gao Zhisheng, and check out the (official) Falun Gong website. Listen to many sides and you will enlighten. Look at the pictures, the persecution cases, you will know what has happened. [...]

So the CCP is using this matter to make news, what do you think of that?

It is ridiculous. Just like what I said, the operation of the student association is actually in the hands of a few people. New York University Student Association did this, entirely because the Chinese Consulate manipulates from behind. It controls several heads, and made this happen, but it can't represent the whole body of Chinese students and scholars. Many students are not happy with the behavior of the students' heads being controlled by the Consulate. Such a thing, such a statement can't be put on the table, what can it explain? Nothing.

The student association itself is a service organization, not a political organization-simply an ordinary student community group. Like the letters from the Colombia Chinese Student and Scholar Association, which claims to represent approximately 4,000 members, that is a huge joke. It is the same as the CCP wanting to represent all the people of China-it is violating public opinion. There are many students and scholars who are Falun Gong practitioners; how can they be represented? This is CCP culture. It is invalid outside of China.

What relationship is there between the student association and the Chinese Consulate?

The original purpose of setting up a student association is to help Chinese students settle in the US, because when they just arrive, they are not familiar with people and the environment, and need such help; also it provides a convenient avenue for students to associate and communicate (with one another). Basically every one is a volunteer. However, with limited financial resources, that's how the Consulate can intervene. [...]

In your experience, how does the CCP control the student association?

They usually have several ways to control the student association:

1. Winning over and maintaining control of the student heads, giving them some personal benefits. For example, regularly inviting them to gatherings at the Consulate, inviting them to some important celebration/ event, or social events; When some important figures come from China, they ask students to organize a welcoming committee, and many people regard it as a honor; they also introduce them to some political and business people from China, and some local community groups under its control, and so on.

2. Providing certain funds to the student association. (This is important) because most of the overseas students in the US from China are not so rich, at least it was the situation in my time. In order to attract more people to join the student association and various activities organized by them, basically there was no membership fee or activity fee.

3. Monitoring correspondence of the student association. The email of the Chinese Consulate is mixed among students, so it can receive open mailing going out from the association, and monitor the trend of the association. Actually, they are not students or scholars, so it is not lawful to do so.

4. Influence and control election of the people in charge of the student association. Because the student association is organized loosely, if you are from the mainland, you often can become a member automatically. But maybe only 20% of members, or even less, participate in activities. Just like in my years, there were 300 to 500 people on the student association's email list, normally about 60 to 100 came to the activities, and that was not bad. Because we were all volunteers, participating voluntarily, some came for a long time, some moved far away, some became busy, some had their own circles and stopped coming. But when the association changed boards or had a big event, more people would come.

During our time, the chairman of the student association was elected. The notice was sent out about a month in advance, to ask everyone to enroll for the election. If only one person enrolled, then this person would become chairman automatically; if there was more than one candidate, then voting was held. Because normally the candidates here have a certain relationship with the Consulate, the Consulate does not worry that much-its interference is not obvious. But if the Consulate must guard against democratic activists or other groups of people, then the Consulate may utilize their control network, operate privately, to stop those people from being elected. I know such a thing happened in the student association election of the University of Minnesota in 2004.

5. Providing other support. For example, they may provide some student associations with a forum server and so on.

So how does the Chinese Consulate use the student association? What do they ask them to do?

They use the student association to create momentum. For example, when important figures from China come to visit or some important celebration or event is forthcoming, it wants to create a "grand" scene.

They also request that the student association pay attention to some group's trends. These things can't be done by the Consulate alone. In my days, it mainly guarded against democracy activists.

When the CCP began to persecute Falun Gong, the Chinese Consulate became the CCP's tool in persecuting Falun Gong overseas. They wanted to use the student association, convincing it to hold a so-called criticism meeting, and collect signatures. I knew many members of the student association did not oppose Falun Gong, but we were all forced to express views by the Chinese Consulate, then the CCP media made some changes to defame Dafa, and the changes were beyond all recognition. Then they took it all back to China, to deceive the populace there.

Previously when I attended their activities, the heads of student associations were quite nervous, not because they regarded me as a threat, but because they were scared that the Consulate would find out that they were going against their wishes, and make troubles for them. One year I worked backstage. Not long after I moved a stool to the stage, a student head saw me and rushed away in a hurry. He was friendly and greeted me on other occasions, but when he was with the Consulate officials, he pretended he did not know me. Sometimes it is very hard to understand this mindset. The control of the Consulate over them is obvious.

The Chinese Consulate also uses the student association to collect information on Falun Gong practitioners, and report practitioners' whereabouts, thereby turning the student association into a spy network. Many people used by the Consulate do not even realize that this is violating other people's rights and freedoms, they even don't realize that the CCP actually turns them into informers, and makes them do dishonorable things with the nature of spies. But, because many of those watched were previously in charge of the association or activists and knew those people, sometimes those people would tell these things to people being watched. A person in charge of the association told me the Chinese Consulate asked about my situation. He told me because he felt we are friends, but he did not realize the seriousness of this matter.

Finally, I also want to say, the Chinese Consulate is paid by the people of China, so it should do things that truly benefit the people. They carry on the CCP's persecution policy outside of China, are accomplices in the persecution, and do dishonorable things. This absolutely should not be done. They drag the heads of student associations into trouble, which will make it hard for these students to gain a foothold in a free society. They are harming these students. I hope the heads of student organizations will not be used by the Consulate again, not be enticed by momentary benefits, and not be confused by the CCP's attractive excuses. [...]

“A School Teacher in Belgium Shares Her Cultivation Experiences”