Texas: Rally Held in Houston to Support 23 Million Withdrawals from the CCP (Photos)

On July 7, 2007, the Service Center for Quitting the Party in Austin, Dallas and Houston, along with The Epoch Times, held a rally in Houston's Chinatown to support 23 million withdrawals from the Chinese Communist Party (CCP). Many Falun Gong practitioners attended the activity. 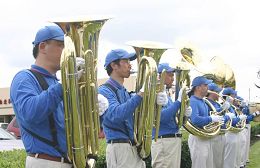 The Divine Land Marching Band performed at the rally. 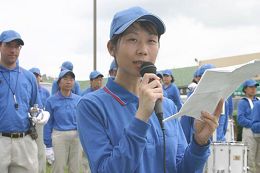 Wang Xiaodan, a Falun Gong practitioner, exposed the CCP's persecution of her father.

The rally started at 11 a.m. and ended at 1 p.m. Mr. Pan from The Epoch Times gave the first speech, in which he pointed out that the trend to quit the Party shows the true will of the Chinese people and that they have already awakened.

Mr. Yang, a practitioner, condemned the violent deportation of Taiwanese Falun Gong practitioners from Hong Kong recently. He called upon people to recognize the evil nature of the CCP and quit it for a wonderful future.

Wang Xiaodan from Austin condemned the CCP's persecution of her father, who was sentenced to 16 years in prison for being a volunteer contact person at the Falun Gong exercise site in Beijing. Ms. Wang called for help to stop the persecution.

Other speakers included Ms. Tang from the service center, Heng He, and Ms. Wang.

The Divine Land Marching Band performed at the rally and attracted many people. A Chinese couple listened to the speakers and told practitioners, "You are the hope of China."