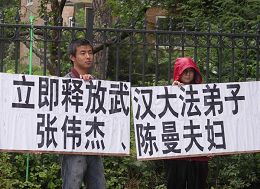 Sunny, the daughter of Zhang Weijie and Chen Man, is a student in Finland. She said, "My relatives in China have not seen my mother, Chen Man, since was illegally arrested on June 8, when she tried to rescue my father, Zhang Weijie. Although the 610 Office admitted that it did arrest her, it keeps refusing to give any reason for the arrests or allow her to see her family members. My grandmother, who is elderly and sick, needs my mother to care for her, but she now has to go around trying to rescue my mother. Because I am overseas and cannot rescue my parents and take care my grandmother in person, I am here to sincerely call on all the governments and people around the world to help put an end to the Chinese Communist regime's persecution as well as rescue my parents and tens of thousands of other Falun Gong practitioners being illegally persecuted."

Wuhan Falun Gong practitioner Zhang Weijie was arrested on his way to his office on March 20, 2007. Without legal proceedings, the Jiangan District 610 Office and the Wuhan City 610 Office instructed the First Department of the Wuhan City Public Security Bureau to arrest the couple with the excuse that if they were not "transformed," more people might be affected. Shortly after, his wife, Chen Man, went to Wuchang City, Hankou City, and Hanyang City in 50 days to visit various governments and judicial institutions, 610 Offices, and brainwashing centers under the supervision of the 610 Office, until she finally saw her husband being persecuted physically and mentally in the wake of his arrest.

After the exposure of the Zhang Weijie's case to the outside world, it came to the attention of the international community and was included in the topics at the Europe-China Human Rights Dialogue. However, the Chinese Communist regime still recklessly arrested Chen Man.

Danish practitioners condemned the Chinese Communist Party's (CCP) cruel eight-year-long persecution against Falun Gong, and urged the officials at the Chinese Embassy to recognize the CCP's intrinsic evil and anti-human nature as well as to withdraw from the Party and its affiliated organizations to save themselves.

“Texas: Rally Held in Houston to Support 23 Million Withdrawals from the CCP (Photos)”