June 2, 2007 was a sunny day in the City of Sapporo, Hokkaido, Japan. Falun Gong practitioners held a rally and parade to disseminate the good messages of Falun Dafa's Truthfulness-Compassion-Forbearance, and expose the Chinese Communist Party's (CCP) nearly eight years of brutal persecution of Falun Gong. This was the first time that the practitioners held such a large-scale activity introducing Falun Dafa and clarifying the facts in the City of Sapporo. 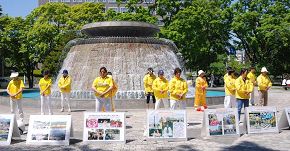 Falun Gong practitioners do the exercises early in a park in Sapporo, Hokkaido 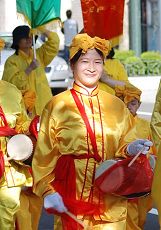 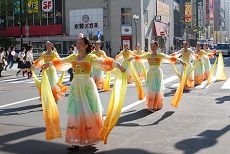 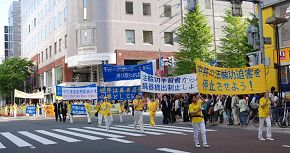 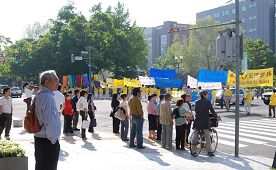 In the early morning, practitioners gathered in Datong Park for a group practice and Fa-introduction activity. At 1:15 p.m. a rally began. A Falun Gong practitioner and associate professor of a university pointed out in his speech that two practitioners passed the eleven-plus examination, but because they practice Falun Gong, the Chinese Consulate in Sapporo exerted pressure on the school authorities, who canceled their matriculation, depriving them of their right to study in Sapporo. This is one more piece of evidence proving that the CCP has extended its persecution outside of China.

The coordinator of the Japan Falun Dafa Association pointed out that there also occurred an incident in Kyushu where Falun Gong practitioners were denied participation in a festival celebration due to pressure exerted by the local Chinese Consulate. He called upon people from all walks life in Japan to be take note of this matter and not allow the CCP to continue its persecution of Falun Gong. Two more Falun Gong practitioners, Yang Guiyuan and Zhang Yanhui, also recounted the persecution that they and their family members had suffered for practicing Falun Gong. They called upon people to see clearly the CCP's evil nature, and quickly quit the CCP and its affiliated organizations, breaking away from the CCP to embrace a beautiful future.

After the rally, a parade set off from the park in the downtown area and marched on busy streets. The parade procession was led by a float bearing the words "Truthfulness-Compassion-Forbearance." Behind the float were handsome waist drummers, and the rounds of drum beats touched passersby. Next were a group of practitioners holding banners reading "Falun Dafa Is Good," "The World Needs Truthfulness-Compassion-Forbearance," "CCP: Stop Killing Falun Gong Practitioners," "The CCP Evil Specter Has Been Uprooted" and other banners. Many passersby carefully read the contents of the banners, and looked surprised. People read truth-clarifying materials from practitioners while looking at the banners, and showed great concern. Elegant celestial maidens were at the end of the parade procession, and many people took pictures of them to capture the beautiful moments. 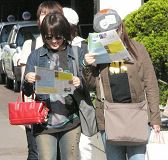 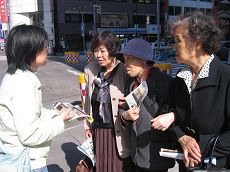 The reporter noticed that two young Japanese ladies had been attentively listening to the speeches at the rally, and followed the parade procession for its entire route. They told the reporter that they are university students who have a great interest in traditional Chinese culture, and have also learned something about the persecution of Falun Gong by the CCP, so they especially came to take part in the activity.

A journalist from a magazine agency "Finance Circle in Sapporo" said that he had learned about the persecution of Falun Gong and understood that only the CCP can do such a thing.

When an older woman, who lived in Shenyang China for ten years when she was young, saw the parade procession, she kept praising, "Wonderful, Marvelous." She also excitedly greeted practitioners in Chinese and felt quite sad after listening to practitioners talk about the persecution of Falun Gong.

The parade lasted for two hours. Afterwards, Falun Gong practitioners went to the front of the Chinese Consulate in Sapporo to start a round-the-clock relay of sending forth righteous thoughts, clearing away evil in other dimensions and protesting the CCP's persecution of Falun Gong.