As of July 2, 2007, more than 22 million Chinese people have quit the Chinese Communist Party (CCP) and the related organizations. To support the withdrawals and call upon more people to quit the party, the Service Center for Quitting the Party in Melbourne held a rally at the city plaza. After the rally, the attendees had a parade along the business area, which attracted many people. Some Chinese students quit the Communist Party organizations at the rally. 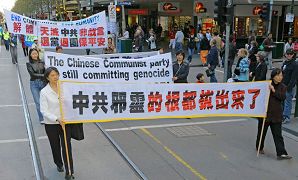 Chinese Students Quit the Communist Youth League at the Rally 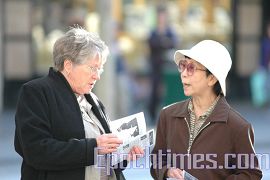 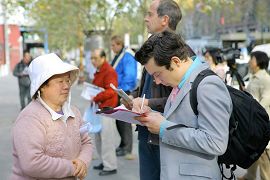 Signing names to support the withdrawals

Many Chinese students were attracted to the rally. They stopped and listened to the speeches and talked to volunteers from the service center. A couple from Guangdong decided to quit the Communist Youth League with names "Blue Sky" and "White Cloud." Another couple from Fujian read all the display boards at the rally and also quit the Communist Youth League.

The CCP is Condemned 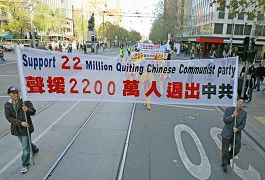 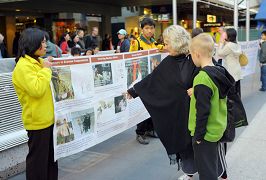 Learning the facts of the CCP's brutality 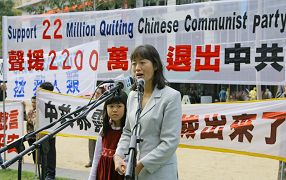 In her speech, Ms. Dai Zhizhen told the attendees of her family's experiences being persecuted. Her husband was tortured to death because he refused to renounce Falun Gong. Her sister-in-law was sentenced to three years, because she publicized the news of his death. Her father-in-law passed away shortly after his son's death due to depression. Since Ms. Dai and her daughter had Australian passports, they were able to escape to Australia. She appreciates the Australian Government's help, and she hopes that more people will help to stop the persecution.

After Ms. Dai's speech, Pilet, who is a law school student, said that he would like to attend the parade. He said with tears that Ms. Dai's speech reminded him of his mother. He agreed with Ms. Dai's words, that our power will be stronger if more people know the facts of the persecution. 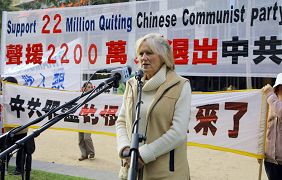 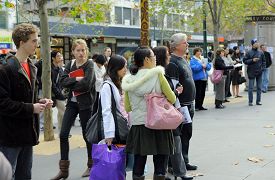 Local citizens listen to the speech

Ms. Jan Becker attended the Japan Olympic Games in 1964. She expressed that she felt responsible to tell people about the human rights issues in China before the Olympic Games 2008. She said that everyone has a common understanding that genocide and the Olympic Games conflict. The CCP always lies, but now more and more people in the world are recognizing its evil nature.

Ms. Wu had been jailed by the CCP twice, for three months each time. She was force-fed and tortured. In 2005, she got a chance to read the Nine Commentaries on the Communist Party and quit the CCP.

Mr. Huang, a researcher from New York, watched the parade. He is visiting Melbourne for a research project. He was born and grew up in the USA, but said that he knew about the CCP's brutality. He was interested in the rally and parade. He stated that no government, except for the Chinese, would allow such a large-scale persecution to occur in their own country.

After the parade, Mr. Liu, who immigrated to Australia from Hebei, China, told the reporter that he supports this movement which tries to wake up people and help them to recognize the CCP's true nature. He said, "The Nine Commentaries on the Communist Party is very profound." 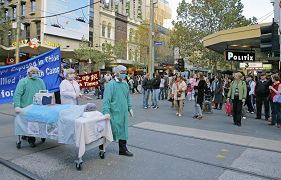 Re-enactment of the organ harvesting

Michael listened to every speaker. He told the reporter that quitting the CCP is a wise choice. He said that the communist powers are disliked by most people in the world and no one in Australia likes them. He expressed that the characteristics of the communist parties are despotic rule, violence and lies.

He thanked the volunteers from the service center when they gave him a copy of the Nine Commentaries on the Communist Party, and he graciously signed his name on the petition to condemn the CCP's persecution.

Tourists were Attracted to the Parade 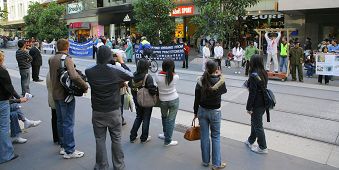 The parade attracts many people

The rally attendees held a parade in the business area. Many people were attracted to it, and many took photos and videos. A lot of Chinese people also watched the parade.

Many Chinese came to watch the parade when it proceeded through the Chinatown. Some accepted truth-clarifying materials. The speakers gave their speeches again in Chinatown, calling upon the Chinese to recognize the evil nature of the CCP. Many Chinese people listened to the speeches.

“Persuading a Policeman to Quit the Party”