(Clearwisdom.net) On June 24, 2007, the Quitting the CCP Service Center in Korea held a rally and parade in Suwon City near Seoul supporting the 23 million withdrawals from the Chinese Communist Party (CCP) and its affiliated organizations.

On June 24, 2007, the Quitting the CCP Service Center in Korea held a rally and parade in Suwon City near Seoul supporting the 23 million withdrawals from the CCP. The building in the background is the Suwon Hwaseong Fortress, a world cultural heritage by UNESCO. 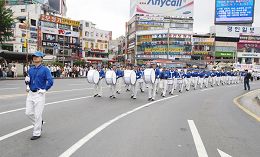 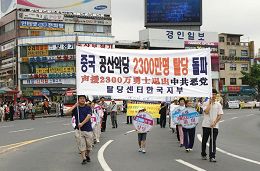 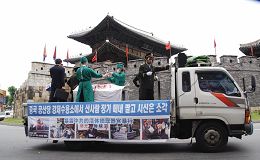 One participant stated that God will soon eliminate the CCP. Those Chinese who joined the CCP's organizations must withdraw from them before the CCP's collapse. Participants thought this activity will help the Korean people recognize the evil nature of the CCP and make the right decisions. A volunteer working in the Quitting the CCP Service Center in Suwon City said that most Chinese people in Korea had realized the importance of quitting the CCP and even some loyal CCP members have quit.

At the rally, representatives from the Quitting the CCP Service Center, The Epoch Times, and the Falun Dafa Association of Korea called on Chinese people in Suwan to quit the CCP for their own safety.

Ms. Xu Weiyu, a volunteer at the Service Center said, "In earlier times, most Chinese were brainwashed by the CCP's propaganda. When we talked to them about quitting the CCP, people would tear up the flyers and scold us. It happened all the time. It is different now. The attitude of the Chinese people is changing very fast. They understand and show their support for quitting the CCP. A lot of the people who previously scolded us have recently quit. Many people are willing to use their real names when quitting the party."

On June 24, 2007, the Quitting the CCP Service Center in Korea held a rally and demonstration in Suwon City near Seoul to support the 23 million withdrawals from the CCP. The person in the picture is Cao Yuxuan, a representative of the Service Center 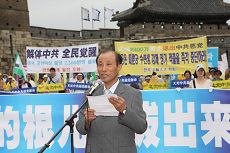 Mr. Zheng Qiuchen, head of the Korea Group of the Coalition to Investigate the Persecution of Falun Gong in China (CIPFG) speaks at the rally

Mr. Zheng Qiuchen, head of the Korea Group, from the Asia Division of the Coalition to Investigate the Persecution of Falun Gong in China (CIPFG), spoke at the rally. Mr. Zheng said, "The Chinese people have a brilliant history in the past five thousand years. The CCP, in its less than 60 years of ruling, has destroyed the culture and stomped on human rights. People are now trying to create a new history by quitting the CCP. I hope none of the Chinese people misses such an opportunity."

Zhang Shufeng, a counselor of the Suwon Social Services said, "I heard a friend say that practicing Falun Gong improves physical health. I can't believe the CCP tortured them and removed their organs while they were still alive. I recently saw in the Chosunilbo (largest newspaper in Korea) an article on how children were forced to do slave labor in brick factories. I was shocked. I feel that international society shouldn't keep silent about the CCP's bestial behavior."

The parade went through major streets in Suwon and caught local citizens' attention. In the parade was the Divine Land Marching Band, traditional Korean dance, waist-drum troupe, banners for the book Nine Commentaries on the Communist Party, and a torture exhibition showing how the CCP removes organs form living Falun Gong practitioners. A participant in the parade said that God will soon eliminate the CCP. The participant hoped that those who joined the CCP organizations in earlier years will withdraw so they will be safe when the CCP is eliminated.

“Toronto, Canada: During the Taste of Asia 2007, Residents Make the Decision to Quit the CCP (Photo)”