Ukraine: Tourists in Svyartogorsk Learn about Falun Gong and the Persecution (Photos)

(Clearwisdom.net) On June 16, 2007, practitioners went to Svyatogorsk, a famous health resort in East Ukraine. They raised awareness about Falun Gong to tourists there, revealing the Chinese Communist Party's cruel persecution of Falun Gong in China and organ harvesting from living Falun Gong practitioners for profit. 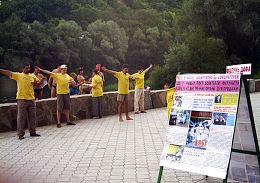 Practitioners introduce Falun Dafa and explain the facts in Svyatogorsk 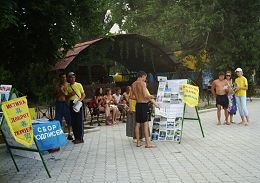 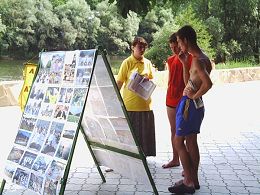 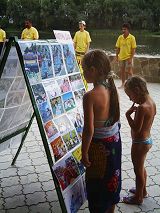 Children are attracted by the posters 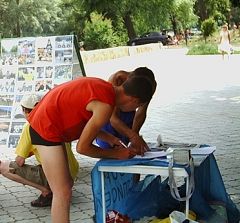 Signing to protest the persecution of Falun Gong

Svyatogorsk is one of the most well known re-cuperation resorts in Ukraine. Its special landscape attracts tourists from different parts of the country. The whole city is surrounded by forests and high mountains and the scenery is beautiful. There is a big outdoor bathing pool and a famous monastery built in the mountains around the pool. As a result, every summer, tourists from different parts of the country come and most of visit the monastery.

Practitioners hold events in this city every summer. This year, before the event began they needed to get permission from the Mayor of the city. When they applied, the deputy Mayor met with them. After hearing the truth, the deputy Mayor said he supported Falun Gong holding an event in the city and he suggested practitioners sign a contract with the local environmental authority. The deputy mayor said, 'The first reason is that this contract can prove your event is legal and supported by the local government. The second reason is that it will be a permanent contract, that means you can have your events anytime you want in the city and do not need to apply for permission.' The deputy Mayor expressed his support and he also recommended some venues with more tourists for practitioners to choose.

Practitioners chose to have their event at a venue in front of the monastery but not far from the bathing place. Many tourists resting on the sands were attracted by the Falun Gong exercise music and came over to see practitioners doing the exercises, read the posters and ask for leaflets. After learning the truth, tourists signed their names on the petition against the persecution of Falun Gong to condemn the CCP's crimes. The poster about Falun Gong flourishing around the world attracted many children. They watched the photos carefully and listened to explanations from practitioners. A young girl said, 'I also want to sign the petition against the persecution of Falun Gong practitioners'.

A tourist said, "I heard about Falun Gong, I read your newspapers. It is such a cruel practice to harvest organs from Falun Gong practitioners. It is a pity that China is still under the control of the Communist Party, just like we were ruled by Soviet Communist Party before, but I believe the Chinese Communist Party will finish soon and good luck with your fight against the persecution."

During the event, a practitioner visited the monastery and wanted to talk to the people there. A staff member met with him and said, "We know the information given by the CCP is very biased and they dare not publicize the truth. We really want to know what is happening inside China now. Thank you for the material you bring." The staff member asked for more materials and said he would pass them to all the people in the monastery.

“Norway: Raising Awareness about the Persecution of Falun Gong in Frederikstad (Photos)”