Switzerland: Introducing Falun Gong in the City of Neuchatel (Photos)

Neuchatel is famous tourism city in Switzerland. In the past years, Swiss Falun Gong practitioners have held several events in this city to introduce Falun Dafa. However, as no practitioners lived there, the city still had no regular practice site. Two months ago, the first ever practice site in the city was established. 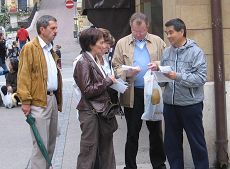 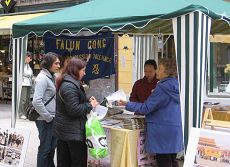 On June 2, over twenty Swiss practitioners from other cities came to Neuchatel again to promote Falun Dafa and raise awareness of the brutal persecution of the practice in China. They distributed truth-clarifying leaflets, demonstrated the Falun Gong exercises and answered people's questions. Many civilians not only accepted the materials but also signed a petition to support Falun Gong and condemn the persecution. Some people who left with information materials came back to sign the petition. 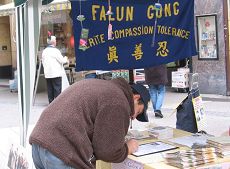 A civilian signed a petition to condemn the persecution

When seeing practitioners doing the Falun Gong exercises, a little girl ran to the practitioners and started to learn the exercises. She remained focused despite the nearby noisy sideshow. She finished all the five sets of exercises quietly while her mother quietly watched her and took some photos with her mobile phone. When the mother learned that there was a group practice every Thursday, she said she would take her daughter to the site. 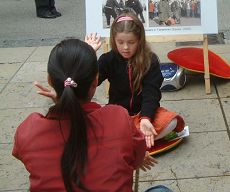 A little girl learned all the five exercises at the site

The weather forecast for the day said it would be a cold and rainy day, but after the event started, the weather became clearer and warmer. Many kindhearted residents learned about the beauty of Falun Gong.

“Sweden: Falun Gong Practitioners Expose the CCP's Atrocities during a Music Festival, Collecting Signatures of Support against the Persecution (Photos)”