Sweden: Falun Gong Practitioners Expose the CCP's Atrocities during a Music Festival, Collecting Signatures of Support against the Persecution (Photos)

On June 1st and 2nd, 2007, a Music Festival was held in Kista, a city north of Stockholm. Taking this opportunity, at subway stations and the plaza outside the festival venue, Falun Gong practitioners distributed truth-clarifying materials to raise awareness of the recently exposed CCP atrocities of harvesting organs from living Falun Gong practitioners and collected support signatures. The signatures collected will be handed to the Swedish government, urging the government to raise concern over the persecution of Falun Gong to Hu Jintao who is visiting Sweden in a few days. 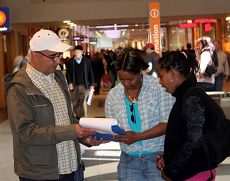 Civilians signed the petition one after another, condemning the CCP's cruel persecution of Falun Gong

During the two days, the weather was very good. When festival goers heard about the atrocities of harvesting organs from living Falun Gong practitioners, many of them condemned the CCP and immediately signed their names and addresses on a petition. A youngster told his friend: ''You can just sign for me, I do not have to do it." His friend told him very seriously: ''No! These atrocities are so evil! You must sign on your own, this needs everybody, and we all should help to stop them! It shouldn't be allowed to happen on this Earth!'' The youngster nodded and said: ''Yes! Yes!'' He signed his name immediately.

On one occasion, four middle-aged men approached a practitioner and said: "When you were talking with others about the atrocities, we also heard. We want to sign your petition, too." 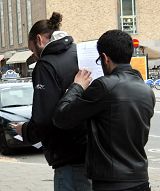 A young fellow signing the petition on his friend's back

Some artists also found time to meet the practitioners and sign the petition. There were also some people who wanted to learn more about Falun Gong and asked for practice site information and how to purchase related literature. The practitioners were grateful to see so many people learn about the persecution and the evil nature of the CCP.

“Rectifying Myself in Fa-Rectification Cultivation”

“Switzerland: Introducing Falun Gong in the City of Neuchatel (Photos)”