(Clearwisdom.net) To commemorate the eighth anniversary of the peaceful "April 25" appeal, Swedish Falun Gong practitioners held an experience sharing conference in Stockholm on April 28, 2007, in which thirteen Chinese and Western practitioners shared their personal experiences in cultivation and in raising awareness of the persecution of Falun Gong. 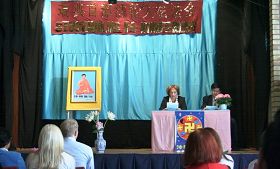 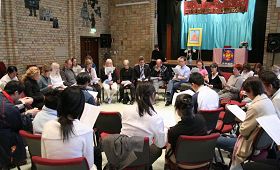 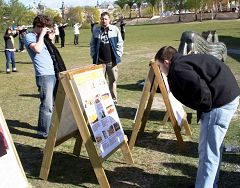 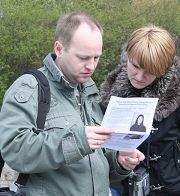 During the conference, the participants paid full attention to the experiences shared by others and gave warm applause from time to time. It fully demonstrated Falun Dafa practitioners' cultivation way in which they learn from each other and encourage each other so as to make progress together.

Some practitioners said that after listening to others' cultivation experiences, they found that most Dafa practitioners have become more and more mature as they not only do the three things required by Master Li well, but they also look within to find their own shortcomings and look at the problems they encounter from the standpoint of the Fa. Many practitioners were moved to tears by Master Li's great compassion.

Western practitioner Hassa shared with other participants how he has persistently persevered in distributing the "Nine Commentaries on the Chinese Communist Party" (CCP) to Chinese tourists at tourist attractions.

Iranian practitioner Gulli talked about her cultivation experiences over the past eight years, what she has enlightened to during the process of translating the Iranian version of Zhuan Falun, the main book of Falun Gong, as well as the miracles she has personally experienced.

The following day, practitioners got together at the Wasa Museum in Stockholm to practice the Falun Gong exercises and expose the persecution. As the weather was fine that day, many Chinese tourists visited the museum. Many of them were surprised to find Falun Gong practitioners there. Some of them took many pictures of the practitioners.

A Chinese man murmured, "I didn't know Falun Gong was so popular in the world. I also saw them in France." When a practitioner explained the facts about the persecution to him, he said that he knows the CCP very well and that what he is concerned about most is how to leave China, so that he is able to have freedom like the practitioners here. When inviting him to declare his withdrawal from the CCP, he said, "I have never had any intention of joining that evil party!"

Another Chinese man told the practitioners that his mother is also a Falun Gong practitioner, so he videotaped the activities for her. The practitioners asked him to relay their greetings to his mother. He nodded his head repeatedly and said that he would definitely do that.

After hearing the explanation of the persecution, a woman from China said that she already knew about the persecution, and therefore she was especially pleased to meet Falun Gong practitioners and was eager to learn the Falun Gong exercises. She asked the practitioners to demonstrate the exercises over and over, while a tour guide and other Chinese tourists were watching by her side. When someone said that it was time to go, the tour guide said, "Don't you see the lady is learning the exercises there? Let's wait for her for a while."

Those who have been seriously poisoned by the CCP dared not accept the practitioners' informational materials. A Chinese tourist, pointing at a man in front of him, asked a practitioner, "Do you know who that person is? He is our party secretary." The practitioner thus went to him and said, "You might as well read the Nine Commentaries. I think you should remember the former general secretary of the CCP Hu Yaobang and former Chinese president Liu Shaoqi, and know their destiny. The man stubbornly said that he didn't want to read the book. The practitioner thus kindly told him the lyrics of the song, "Finding Truth": "When disaster descends, it favors neither rich nor poor. But there is a way out. Quickly find what is true!" The practitioner also said, "As the truth is right here, you should not miss this golden opportunity to learn the truth, even though you are in a hurry." But the man just lowered his head and went away silently.

Seeing those Chinese people who have been deceived by the evil CCP, Falun Gong practitioners especially felt the importance of their responsibilities. They said that they would consistently redouble their efforts to clarify the truth to the Chinese people, so that they are able to choose a bright future.