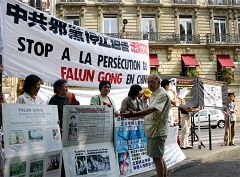 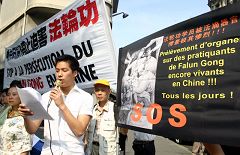 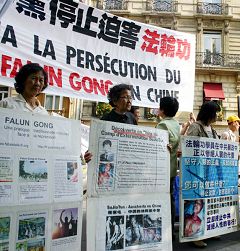 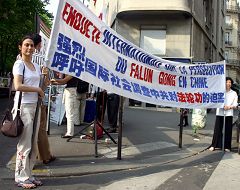 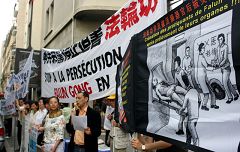 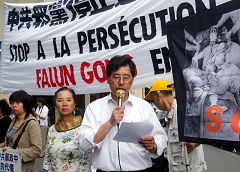 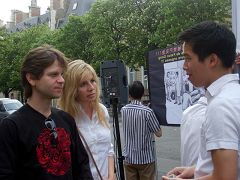 Mr. Hu, a Falun Gong practitioner, said, "Since the CCP launched the persecution against Falun Gong in 1999, we have been holding activities at Paris' Human Rights Square every week to reveal the CCP's inhuman persecution of Falun Gong and to expose its evil crimes to the entire world. We will keep disclosing and resisting the persecution in a peaceful way until the end of the persecution."

An elderly French man had a long talk with Falun Gong practitioners. After learning the facts of the persecution, he made an impromptu speech through an amplifier. He said, "I believe everyone should have freedom. There should be no exception. Chinese people have such an ancient culture and a long history. It is unreasonable to exclude them from freedom. This kind of persecution of Falun Gong is a crime against humanity. I will try my utmost to inform more people of this horrible and brutal persecution."

Through an amplifier a Falun Gong practitioner exposed the CCP's evil crimes to the ambassador and staff in the Chinese Embassy and reminded them, "Heaven will eliminate the CCP. Quit the CCP and save your life." Hopefully, those who are still hesitant to withdraw from the CCP and its affiliated organizations will be awakened. A visitor from the US said, "Everyone should have the right to speak out. Such a totalitarian regime as the Chinese communist regime is doomed to destruction."