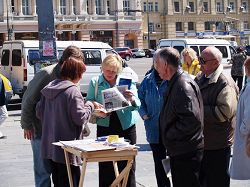 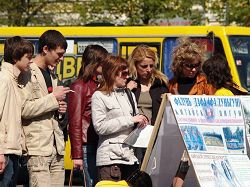 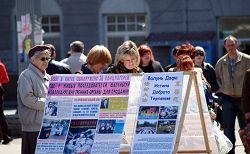 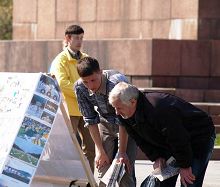 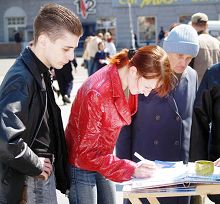 After learning about the persecution, many people signed a petition to condemn the Chinese Communist regime

The activity was held at Constitutional Square in the downtown area. There were many local residents passing the square, and many of them stopped to attentively view the display boards and listen to the practitioners' explanation of Falun Gong. Kharkiv City's citizens were shocked by the Chinese Communist regime's persecution against Falun Gong, and many signed the petition to condemn the Chinese Communist Party (CCP). Moved by the practitioners' peacefulness and compassion, some people took the initiative to learn the Falun Gong exercises.

During the activity, many Chinese people passed the square as well. They were shocked to see people practicing the Falun Gong exercises on the square freely, along with the display boards exposing the atrocities of the CCP's persecution against Falun Gong. They viewed the display boards attentively. Some also took the initiative to talk to practitioners. When the practitioners told them about the huge wave of withdrawals from the CCP, many said that they had learned of this matter a long ago. After realizing the truth, some indicated that they would visit the website at home to declare their withdrawals from the CCP and its affiliated organizations (Chinese Communist Youth League and Young Pioneers).

A Chinese person told the practitioners, "In reality, we do know that the CCP is not good as it persecutes righteous people. However, considering the fact that we need to go back to China, it is not suitable for us to declare our withdrawals from the CCP at present. But we do know the importance of this matter in our mind." Upon seeing Ukrainian Falun Gong practitioners saying "Hi" to them, the Chinese tourists were excited and said "Hi" to them again and again. Some didn't dare to accept the truth-clarification materials out of their fear of the CCP, but they were surprised to see western people practicing the Falun Gong exercises there.

The Chinese Communist regime has incessantly persecuted Falun Gong over the past eight years, but these kind-hearted people who believe in "Truthfulness, Compassion and Tolerance" have not been defeated by the atrocities. Instead, more and more people have started to practice Falun Gong. Currently, Dafa has spread to over eighty countries and regions around the world. Many people have come to know the intrinsically evil nature of the CCP, and more and more kind-hearted people and international organizations have stepped forward to condemn the Chinese Communist regime's atrocities. As long as the CCP still persecutes Falun Gong, Falun Gong practitioners will never stop exposing the regime's atrocities.

“My Understanding of Sentimentality and Predestined Relationship”