On April 29, 2007 practitioners from the Jiayi area in Taiwan held an experience sharing conference at the Boai Elementary School. Many practitioners talked about how they resolved conflicts and raised their xinxing levels while working together to host the Divine Performing Arts Spectacular in Jiayi City. 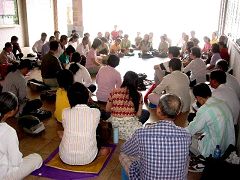 Some practitioners shared that audience seemed to truly enjoy and appreciate the performance. They also talked about the challenge they felt in the beginning when they were selling five thousand tickets for the two performances. Once they realized that they must trust Master and the Fa and have strong righteous thoughts, selling the tickets was easy and smooth.

While trying to sell tickets, practitioners told people about the true Chinese culture, and the process gave them deeper understanding of using the Nine Commentaries on the Communist Party as a tool to disintegrate the Chinese Communist Party (CCP). The book Disintegrating the Party Culture is for rebuilding Chinese culture. The Divine Performing Arts show was a powerful catalyst towards developing Chinese traditional culture. I hope everyone will help promote the book Disintegrating the Party Culture.

Others said that we must remove other practitioners' negative preconceptions whenever there is a conflict while working on a project together. We all must understanding that helping sentient beings come to watch the performance by Divine Performing Arts is the goal. Watching the performance will cleanse their wicked thoughts, so they will be saved.

Practitioners also said that we must not appear overzealous to ordinary people when telling them that attending the performance will purify the mind and body. Others shared that we must remove sentimentality and maintain righteous thoughts so work can be accomplished smoothly.

One practitioner mentioned, "Have we contacted people who have rejected Falun Gong so they could come and watch the Divine Arts performance? Did we notice that the VIPs we invited attended the performance, and did we take the time to interview them? What is most important is that we must pay attention to not leaving out any sentient beings that we could save.

One practitioner was hurrying to help out with Tainan City's Divine performance, and his car hit a motorcycle. The cyclist suffered broken bones. The practitioner read Zhuan Falun to him day and night and taught him to recite "Falun Dafa is Good." The cyclist recovered quickly and was discharged from the hospital in two weeks. The practitioner said that we must always maintain strong righteous thoughts.

Another said, "Via the performance, the audience has experienced authentic traditional Chinese culture and they seemed deeply touched. We reached our goal to save sentient beings; at the same time we as a group improved while working together to hold the performance. Perhaps we could examine what we have not done well so we could do better in the future." He also said we should encourage each other and do well in each project no matter how many projects we are doing. We should complete each project well and do it professionally to form a better whole body.