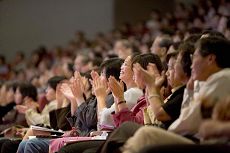 A diplomat from India and his daughter

Ms. Gu Yan-zhuoyun, the leader of the Women's Association of the Republic of China, wife of Mr. Gu Chenfu, the former chairman of the Straits Exchange Foundation, was deeply touched by the show. She wrote to the organizer: "The Divine Performing Art Troupe's performance is very high level. It is educational and promotes traditional Chinese values. It is not only beautiful, but also has profound meaning."

Mr. Ramon Diaz Pereira, the ambassador from Paraguay, and his wife enjoyed the show very much. He said that he could not find any words to describe it. He and his wife were moved by the song, "Tiananmen Square Please Tell Me." They were sad about the situation of Falun Gong practitioners and worried about human rights in China.

H.E. Jorge Ricardo Putseys Uriguen, the ambassador from Guatemala, and his wife said that they were amazed by the performance. They were impressed by the music and the beautiful costumes. His wife was touched by the dance, "Candlelight Vigil," which tells the story of an orphan of Falun Gong practitioners, whose parents were tortured to death during the persecution. She said that she can understand the songs by Jiang Min, Yang Jiansheng, Bai Xue and Guan Guimin, and she really appreciates the content of the songs.

Mr. Eero Laitinen, the Commercial Representative from Finland, said that the show gave him a totally new feeling for Eastern culture, although he thought that he was familiar with it.

He was impressed by the drum performance, and enjoyed the dances too. Mr. Laitinen said that he knew about the persecution of Falun Gong, since he lived in China for a while. He emphasized that human rights are very important.

Martha A. Garcia Hernandez, a diplomat from Dominican Republic, said that it was her first time to see such a great show, and she appreciated the content of the music and dances. She said that she can remember all the details. Her favorite dance is "A Dunhuang Dream." She said that she could related to the dancer's feeling. She said that the show helped people understand that China has a very profound, great culture.

Mr. Wu Chenchi, the chief of the Immigrations Bureau, said that the show is very professional. He enjoyed the Erhu playing very much.

Mr. Yang Kuichie, chief of the Culture Bureau in Keelung, said that the show brings the spirit of Falun Dafa to the audience and lets people feel the compassion of Falun Gong practitioners. Mr. Yang said that he would recommend the show to his friends.

Ms. Tian Liyun, a famous talk show host, said that she has never seen such a pure show before. She said that she was deeply touched by the pure Chinese culture manifested by the show.

Ms. Tian said that the performers' smiles were charming, through which the audience could tell that they were performing with their hearts.

Mr. Wu Rongyi, chairman of the Taiwan Board of Trade, and his wife, Ms. Lin Huimei, enjoyed the show very much. They said that they will bring their grandchildren to the show next year.

Mr. Chang Chingyu, the former chief the Information Bureau of the Parliament, and former presidential advisor, said that the show promotes a high moral standard and leads people to return to a peaceful way of life. Mr. Chang's wife was touched by the show. As a Chinese, she was proud of the show. She said that the performance manifested the principle of "Truthfulness-Compassion-Forbearance."

General Hsie Kuoshu, the Secretary of the World Chinese Association, and his wife enjoyed the show. He said, "My heart was moved, because I saw the stuff of our ancestors." General Hsie continued, "I am touched by the story of Yue Fei, because I had a similar experience as Yue Fei."

Mr. Sun Dingping, the former CEO of Weifeng Square Department Store, said to the reporter after the show, "It is great. It is truly great." Mr. Sun said that he had the feeling that all the performers reached their best mental state before they came to the stage, and they devoted their hearts to the show, instead of simply going through the motions. Mr. Sun was amazed that the performers, who were born and grew up in America, have such deep understanding of the traditional Chinese culture and were able to manifest it through the dances so perfectly.

Mr. Su Junhsiung, a former Supreme Court judge and professor at Taiwan University and Mr. Chiu Chiahsing, a well known artist, said that the cultural content of the show was beautiful and helpful to promote a higher moral standard.

Mr. Chiu liked the Erhu playing very much. As a Buddhist, he could feel the benevolence of the Buddha through the show. He said that it was very precious that the performance manifested Buddha's compassion, which can be accepted by everybody.

Ms. Wu Bichu, the president of the City Council of Taipei, said that the show has a positive influence on Taiwanese society, for it promotes an upright moral standard. Mr. Su Chingfeng, an official from the National Palace Museum, said that the show is the best in the terms of everything, including music, dance, stage design and cultural content.

Ms. Wang Yuting, a Member of Parliament, said that she felt very peaceful and comfortable during the show. She was amazed and happy that the performances manifested historic stories, which many Chinese people are familiar with. She was also impressed by the professional skill of the dancers.

More than 30 thousand Taiwanese people enjoyed the Divine Performing Arts' Global Tour. Next, the troupe will give two performances in Chiayi on April 20 and 21.