(Clearwisdom.net) On April 8, 2007, Falun Gong practitioners held an activity at Paris' Human Rights Square, near the famous Eiffel Tower, to protest against the Chinese Communist Party's (CCP) atrocity of organ harvesting from living Falun Gong practitioners. As they protested they demonstrated Falun Gong exercises, which emanated merciful and compassionate energy and attracted tourists from all over the world to stop to watch and enjoy the peace and beauty of the scene. Some people even imitated practitioners' exercise movements. 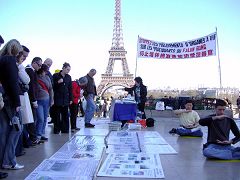 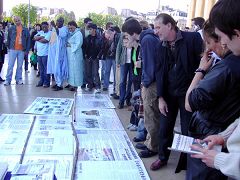 The truth of Falun Gong attracted many people's attention 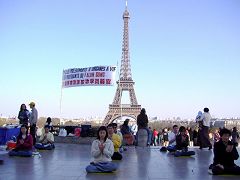 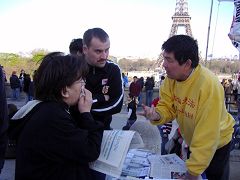 People are eager to learn the truth

Apart from demonstrating the goodness of Falun Gong, practitioners also told local people and tourists from all over the world about the brutal persecution of Falun Gong launched by the CCP over eight years ago. Various appalling pictures stated different tragic stories. People were especially shocked by the images exposing the CCP's crimes of organ harvesting from living Falun Gong practitioners. Their expressions indicated the indignation in their hearts towards the most brutal and inhuman crime on the earth. People who learned the truth signed their names on our petition form one after another to support Falun Gong practitioners and protest against the CCP's persecution. Some of them wanted to know more detailed information, and some Chinese people also took pictures of the display boards. 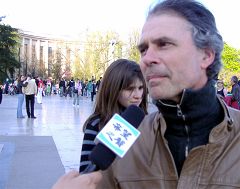 A French citizen, Mr. Wright, said during an interview: "I do not have a deep understanding about Falun Gong as a spiritual cultivation practice, but what I find shocking is this persecution of people based only on their spiritual beliefs. I feel that we should pay more attention to this persecution."

Regarding the CCP's crimes of organ harvesting from living Falun Gong practitioners, Mr. Wright said, "This really shocked me. Those people's organs are stolen simply because they practice spiritual cultivation, this absolutely cannot be tolerated!" 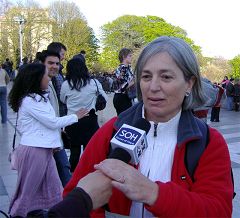 Ms. Talavera, a Spanish biology professor, said, "I was moved when I saw six or seven Falun Gong practitioners sitting on the Human Rights Square peacefully performing exercises to such peaceful music. However, when I read the materials placed on the table and understood that the organ harvesting from living persons is happening in China, I felt upset. They have been put into jail simply because of practicing a qigong exercise named Falun Gong."

"This is my first time to know about the persecution of Falun Gong in China, it really shocks me. I saw so many Falun Gong practitioners on this square to protest against the persecution, I also read the information on the display boards, and learned the facts about the brutal persecution in China - even their organs could be harvested - this is very horrible."