Frankfurter Allgemeine Zeitung (Germany): Organs from Executed Prisoners Are Not Sufficient to Account for the Large Number of Transplants (Photo)

On April 2, 2007, Frankfurter Allegemeine Zeitung, the second largest newspaper in Germany, carried an article reporting about how the Chinese Communist Party (CCP) persecutes Falun Gong and murders Falun Gong practitioners by removing their organs for sale for organ transplants. 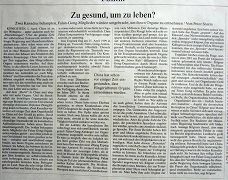 The article pointed out that in China, "The specific number of executed prisoners in past years is a topic of discussion which has been been a source of vexation between the CCP regime and international human rights organizations." Even considering the highest estimated number of executed prisoners every year in China, the source of many organs for transplant in China cannot be explained:

"A few months ago, the CCP publicly admitted the fact that it has removed organs from executed prisoners. For this, the explanation by the government was that through this method, these executed prisoners could contribute to society. Besides that, before removing their organs, they had gotten the written consent from those executed prisoners 'as far as they possibly could.' But, no matter how people look at such a thing, an executed prisoner only has two kidneys and one liver. However, in the "markets" of China, there have been many more organ transplants performed and the source of these organs cannot be provided by authorities. Zhang Erping, a former Chinese diplomat who now lives in the USA, said: Few Chinese people are willing to offer their own organs, almost no one. "

The Frankfurter Allegemeine Zeitung article discussed the "Report into Allegations of Organ Harvesting of Falun Gong Practitioners in China" by David Matas, a human rights lawyer in Canada, and David Kilgour, a former Canadian Secretary of State for the Asia Pacific region, which was published last year. "According to the report, Falun Gong practitioners are murdered with malice without going through any legal formalities. The purpose of doing this is to remove their organs for sale."

The report revealed: "The persecution of Falun Gong reached a climax in 2001. They [authors Kilgour and Matas] quoted what a Chinese surgeon said. This surgeon had confessed to his wife that he had removed corneas from over 2000 prisoners. After the operations the victims all lost their lives. Two years later, though the surgeon was rewarded with a large sum of money because of this evil conduct, he did not want to carry on."

The article added: "Kilgour and Matas sent some people, in the capacity of prospective patients, to phone hospitals in China asking about organ transplants. It is said that staff in the hospitals answered these patients: They guaranteed to supply them with the organs they needed. A patient just needed to come to China."

Compared with waiting times in other countries, where people have to wait for up to ten years, the waiting time for obtaining an organ in China is unusually so short that [it is clear that] a large number of live human organ banks exist, which makes the supply possible. These two Canadian citizens said: Only those who have a large and stable source of organ supply without depending on organ donations can do this.

The article also quoted a piece of evidence newly added by Kilgour: "Kilgour gave an example of a person who went to Shanghai for a kidney transplant. In order to find a suitable organ for this patient, the doctor supplied him with and transplanted eight kidneys in succession until his body accepted an organ."

Mr. Kilgour and Mr. Matas inferred, "In 2001, the Chinese army's budget was cut. The army tried to earn money through market means by selling organs of executed prisoners. When the number of the executed prisoners was not enough, the army started to use Falun Gong practitioners."