(Clearwisdom.net) (Minghui correspondent Ying Xin from Ottawa) On April 9, 2007, the Canadian Broadcasting Corporation (CBC) broadcast in its morning news that Zhang Jiyan made public a memo of the Chinese Embassy, which shows that a diplomat with the surname Huang ordered his colleagues to organize Chinese students and citizens in Canada and Canadian Chinese to interfere with NTDTV's application to the Canadian Radio and Telecommunications Commission (CTRC). 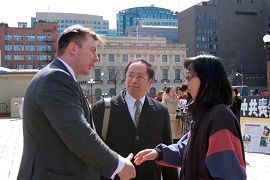 At the rally on March 30 supporting 20 million withdrawals from the CCP, Zhang Jiyan announced her defection from the Chinese Embassy. Canadian MP Rob Anders (left) shook hands with Zhang Jiyan (right) to support her.

The report stated that a leaked copy of an embassy memo suggests China may have interfered with an application to the Canadian Radio and Telecommunications Commission. NTDTV applied to the CRTC for a broadcast license in 2005. The leaked memo proposes using Chinese students in Canada to mount a campaign opposing the application.

The report stated that Zhang Jiyan is the wife of a Chinese diplomat and in recent years a secret Falun Gong practitioner. When her husband was notified that he was being transferred from Ottawa back to China she says that she fled the embassy, but not before copying at least one document.

In it a senior diplomat named Huang instructs a junior colleague to quote "knock down a broadcast application by the New Tang Dynasty Television to the CRTC."

Huang instructs his colleague to organize Chinese students studying in Canada, Chinese citizens living in Canada and Chinese Canadians to lobby against the application.

In an interview with CBC, Zhang suggested that Canada's Chinese community needs NTDTV because the established Chinese media kowtows to the Chinese government. She said most other Chinese media companies are afraid of the authorities in their country and stay away from any news related to Falun Gong.

A former Canadian diplomat, Charles Burton, said that asking foreigners to influence the decision of a Canadian commission process clearly violates the rules of international diplomacy.

"If they are asking Canadians of Chinese origin to lobby on behalf of the embassy. That certainly crosses the line."

In the 1990s Charles Burton was a senior diplomat at the Canadian Embassy in Beijing.

"The Chinese embassy doesn't have any right to interfere in domestic Canadian affairs. Nor does the Canadian embassy in Beijing have any right to tell the Chinese government what sort of decisions they should make with regard to weather or not a TV station is allowed to be shown on Chinese cable."

Burton said if the memo is authentic, the Chinese campaign would have violated a principle of diplomacy that an embassy does not interfere in the internal affairs of another country.