Boston: Celebrating 30 Million People Quitting the CCP and Its Affiliated Organizations Three Years After the Publication of the Nine Commentaries (Photos)

(Clearwisdom.net) On December 2, 2007, the Boston Global Service Center for Quitting the Chinese Communist Party (CCP) held a rally in Boston. The rally was to celebrate 30 million people quitting the CCP and its affiliated organizations and the widespread distribution of the Nine Commentaries on the Communist Party three years after it was publicized. Speakers from around the world exposed the true nature of the CCP and called upon the Chinese people to quit the CCP in order to have a bright future. 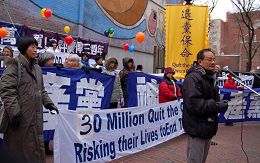 Chen Du, Chair of the Association of Friends of Hong Kong and Macau, speaks at the rally celebrating 30 million withdrawals from the CCP 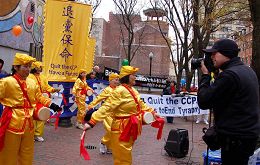 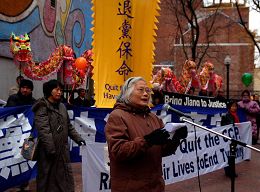 Ms. Luo, a volunteer for the Service Center for Quitting the CCP speaks about her experience of helping people in China to quit the CCP through phone calls

At noon on December 2, 2007, signs displaying "Heaven will eliminate the CCP." "Quit the CCP to save yourself," and "The power of the Nine Commentaries" were seen everywhere in Boston's Chinatown and the park near the Beach Street Gate. Performances from the Waist Drum Team and group singing attracted the attention of people passing by. At the same time, videos and telephone recordings of volunteers helping people to quit the CCP were played at the rally, sharing with the population in Chinatown the joy of quitting the CCP and its affiliated organizations.

That day the temperature in Boston was about 20ÂºF. Still reporters from the Boston Globe, the Boston Metro, and Emerson College Online News came to the rally to report the event.

A sophomore majoring in multimedia news from Emerson College said the movement to quit the CCP was worthy of respect and was an important step in stopping the suppression of Falun Gong.

Chen Du, 82, Chair of the Association of Friends of Hong Kong and Macao, said at the rally that he left China in 1949 and was never persecuted; however, all of his friends and family stayed in China and suffered persecution to different extents. Chen read the Nine Commentaries three years ago and felt that he saw the light that would save China.

Ms. Zhou from the Boston Global Service Center for Quitting the CCP has helped almost 400 people to quit the CCP in the past three years by making phone calls to China. She shared her stories. A worker from Beijing said the CCP tried to turn people into beasts, noting the sharp fall of moral values in society. People felt they were sitting in the dark waiting for dawn. Another elderly woman from Beijing said she wanted to receive more phone calls that would tell her the truth about China.

Ms. Luo from a Service Center said she was retired and using her free time to make phone calls to China because she cared about her countrymen. She shared a story about talking to staff in a university. One staff member felt repelled at first but in the end agreed to quit the CCP after learning the facts of the CCP's persecuting Falun Gong and and about removing organs from living practitioners.

Li Ying, a retired engineer, spoke at the rally. She said the CCP abused the names of freedom, democracy, and peace and has always been a dictatorship that is against democracy and humanity. She said the CCP rules with lies and violence. She called on more people to quit the CCP and to welcome China's future without the CCP.

Ms. Zhao said the CCP tricked her father into speaking his mind and criticizing the politics, then later persecuted him as a "rightist." Her father was forced to become a miner and was later taken to a forced labor camp and brainwashed. In 1957, 1.2 million people were labeled as "rightists" and persecuted. Many Chinese were forced to commit suicide and tens of thousands of children lost their parents. She said many of the older generation never forgot the crimes the CCP committed against the Chinese people and they hope that the younger generation will learn the true nature of the CCP.

Liang Yufeng, Vice Chair of the Global Service Center, said that many high level officials called the Center and found out that it is a nonprofit 24-hour shift organization. People in China learn about the Nine Commentaries through various channels and express their will to quit the CCP and its affiliated organizations through the same channels. Their statements are posted on http://tuidang.dajiyuan.com/.

A Chinese lady, Ms. Zhu, cried at the rally. She has been visiting Boston for over 30 years. She has heard her grandmother talking about landowners getting shot or persecuted during the Land Reform. Ms. Zhu was not born with a favorable family history and thus was persecuted by the CCP when she was little. When Ms. Zhu saw the historical pictures at the rally, they reminded her of the tortures her relatives suffered. She hoped overseas Chinese would learn more about history and not be deceived by the CCP anymore.