The Divine Performing Arts' Holiday Wonders Show will be held in Baltimore on December 18. On the afternoon of November 30, the Baltimore City Council issued a proclamation to the Washington DC Falun Dafa Association, the hosting organization for the show. The president of the council said that she hoped every resident of Baltimore would have an opportunity to see the show and experience authentic Chinese culture. 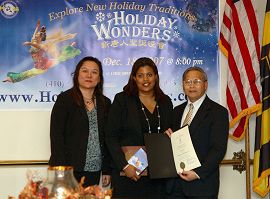 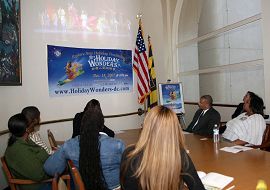 At the proclamation ceremony, Stephanie Rawlings-Blake, President of the City Council, read the proclamation congratulating the Falun Dafa Association for hosting the show and recognized its remarkable efforts in bringing the show to the Lyric Opera House, the largest theater in Baltimore.

Dr. Shantao Lai, Chairman of the Washington DC Falun Dafa Association, said, "We are honored to have the opportunity to host the acclaimed Divine Performing Arts in Baltimore. We also thank the Baltimore City Council for the proclamation. During this Christmas holiday, we hope that Baltimore citizens and tourists will seize this opportunity to see this world-class show and experience authentic Chinese culture."

After watching the highlights, Ms. Rawlings-Blake commented, "I can tell that the dancers are well-trained and their costumes are beautiful. This is a very talented group." She said that it was very exciting to have such a good opportunity to appreciate Chinese culture in the City of Baltimore.

Ms. Rawlings-Blake also encouraged Baltimore residents to go see the show. She hoped that everyone would have an opportunity to watch it. "The dancers are great and the show is very exciting. Seeing it will be a wonderful experience," she said.

One person on the city council staff can speak fluent Chinese. After seeing the highlights video, he said, "This show is very interesting. I hope that I can see it in the theater." He said that the show will help people learn more about Chinese language and culture.

Dr. Yu said that the Divine Performing Arts' worldwide tour was very successful last year. More than 200,000 people saw the performances as they toured the US, Canada, Europe, Australia, New Zealand, and Asia. The authentic culture depicted by the troupe captivated both Chinese and Western viewers. This year, the show will be staged in more than 60 cities around the world, with an estimated audience of 650,000. (website: www.shenyun.us/gb/node/293).

“Boston: Celebrating 30 Million People Quitting the CCP and Its Affiliated Organizations Three Years After the Publication of the Nine Commentaries (Photos)”