Holiday Wonders has performed many shows at the Beacon Theatre in New York this year. Audiences have highly praised the magnificent backdrops, music, choreography and profound messages.

Dancer: The performances are full of energy

Deborah Bianculli attended the show on December 22nd. As a dance performer, her favorite acts in the production were those of the Chinese traditional dances. Deborah said, "They are so beautiful that it's hard to describe. The dancers have great skill, and I have learned a lot of techniques from them." 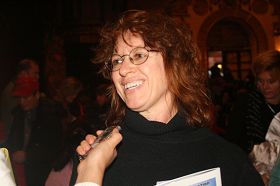 Deborah said her favorite performance was "Drummers of the Tang Court," and that she felt her whole body moving with the dance and music. She said, "I used to play the Japanese drums, but have never been so moved." Deborah felt the most remarkable aspect was the creativity with which the drums were integrated into the dance choreography. She said the drumming performance was very powerful, full of emotion and masculinity; the great momentum was blended with inspirational music, and every drum beat was deeply moving.

"I enjoyed the entire show very much, it has special characteristics of Chinese culture. The sight, sound, and whole artistic mood was perfect."

Hearing that the upcoming Chinese New Year Spectacular at Radio City Music Hall will also be performed by Divine Performing Arts, she said, "I will bring my niece and nephew to watch the show. One of them is a musician, and the other is a dancer. I believe they will enjoy it, because all arts are connected. They will like this feeling of purity."

Painter: My art will take inspiration from the performances

After watching the performance on December 22nd, Sehu Amennun from Brooklyn, New York, said that he has been artistically inspired by the performances, and that these inspirations will be reflected in his future artworks, displaying the connection between the divine and human morality. 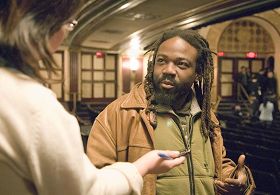 Sehu described the show as a perfect blend of Eastern and Western cultures.

Sehu also expressed his admiration of the message spread by Holiday Wonders and said, "Fantastic, we can perceive the spiritual side of the show. The root and source of our culture should be expressed by the arts. I am very glad to see this from the show." Sehu has a studio in Brooklyn, and his artistic creations are mostly wooden statues and paintings. He said that the theme of compassion in Holiday Wonders very much matches the Christmas holiday spirit, and described the show as "a perfect blend of Eastern and Western cultures."

Sehu admired the backdrops and combination of music and dance. He said, "The dancers are full of energy and vitality. I really liked it very much. This is a great show."

Dance instructor: The show makes me proud to be Chinese

Professional dance instructor Lifan Wu highly praised the dances, costumes and choreography, as well as the performers' skill and the show's cultural meanings. She repeatedly said that the show "makes me proud to be Chinese." 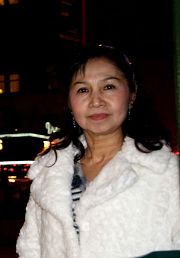 Lifan began learning ballet in Taiwan at the age of four. She later studied modern dance in Japan and spent many years working with Chinese classical and ethnic dance.

"Many ethnic dance costumes of today have colors that seem old, and give people the impression that Chinese culture is a thing of the past. But in this show, the colors adopted for the ethnic costumes are very bright and elegant, with very appropriate combinations, thus give it a nice fresh feeling," she said. In particular, Lifan praised the use of purple on the Mongolian costumes, "The purple helps to emphasize the blue, this is just how they should paired up."

The dramatic "The Power of Awareness" was a surprise for Ms. Wu, "At the outset I thought their costumes were a little too casual. However, to my surprise, when many of the actors stood together [to depict the joint awakening of people, in standing up against persecution], the feeling you get is, they have taken a stand from the bottom of their hearts. This is the feeling that dance should present. Their gaze and graceful bearing really touches you deep inside."

Ms Wu said, "The choreography of these performances and the changes in formation are very good. It seems that all the performers are highly skilled. In a normal production, having 70% of the cast be highly skilled performers is considered very good, but in this show, almost every performer dances with perfect coordination, which gives the director more options."

Musician: The show is perfect in every aspect

New York musician Shannon Taylor very much enjoyed the Holiday Wonders. He expressed with emotion how the show captivated his heart as soon as the curtains lifted, revealing a beautiful scene. 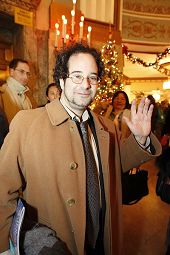 Musician Shannon Taylor said, "Even though I have a lot of experience, I could not help but cheer for this show."

According to Mr. Taylor, the production's music, dance, costumes, backdrop, sound effects, and the entire arrangement of decoration and stage props were perfect and blended together naturally to give it a great deal of power.

"The technology in the backdrop and its effect in this show are rarely seen. From the backdrop, the different characteristics of ancient China, Mongolia, and Korea are displayed, as if we were actually there. You get a very strong feeling of personal immersion in the setting," he said.

Taylor has attended many musical performances and managed various artistic shows. He said, "Even though I have a lot of experience, I could not help but cheer for this show. Many aspects of this show are unique and cannot be seen anywhere else."

He praised the performances in the show are rich and colorful, and the choreographers and directors as skilled and talented. Furthermore, the singers and dance performers looked beautiful with movements to match. Taylor concluded it must be the display of their beautiful hearts. "The entire show conveys the messages of brightness, joy, life, and hope. These are not only the essence of Chinese culture, but universal values. From them we can see the compassion of human nature, as well as the ideals of human rights, which is very inspirational and educational. That was the best part."

The Holiday Wonders is accompanied live by the Divine Performing Arts Orchestra. The orchestra is based on Western instruments and integrated with Chinese traditional instruments. Taylor expressed his amazement toward this bold combination. He explained that Eastern and Western instruments have different qualities and characteristics, and to combine them was a very wise decision, as it brought out the qualities of a Western orchestra, while maintaining the attributes of Chinese traditional art. Mr. Taylor said the effects were first class, with beautiful melodies that worked seamlessly with the show.

Mr. Taylor said that he will no doubt invite friends and relatives to attend the Chinese New Year Spectacular.