(Clearwisdom.net) Nine performances of the "Holiday Wonders" show have been presented by the Divine Performing Arts (DPA) in New York City, Baltimore and cities in North Carolina. The first performance was at the Beacon Theater in New York on December 18, 2007. The Chinese Communist Party has attempted to interfere with the shows. 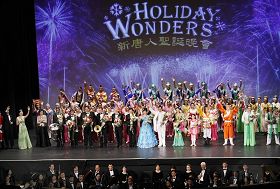 New York State Assemblyman Michael Benjamin received a letter before the premiere of Holiday Wonders on December 18 from the Chinese Consulate General in New York that vilified and attacked Falun Gong and also intimidated with references to "Sino-US relations." This is a convention practiced by the Chinese Communist regime in an attempt to prevent him from supporting NTDTV's Holiday Wonders and Chinese New Year.

Mr. Benjamin condemned the CCP's actions. His wife, Mrs. Kennedy Benjamin, said that she had only planned to go to the reception originally, but she decided to find the time to attend the show after receiving the slanderous letter.

To help people get to know the true nature of the CCP, Assemblyman Benjamin released the letter to the public. He pointed out that the CCP is in fact a cult.

Assemblyman Benjamin and his wife attended the show on the first day as planned.

When answering why the CCP is so afraid of a show that promotes traditional Chinese culture, Mr. Benjamin said that the CCP only wants to make artificial art that speaks for the CCP cult. The CCP only allows its own voice in performances. And that's its history.

Prof. Showing Young, of the Business Administration Department, National Sun Yat-Sen University, said that the DPA's performance in Taiwan last year helped him understand better the beauty of the Chinese culture. Regarding the CCP's interference, Prof. Young said that in mainland China, the CCP controls all media, so it can deceive the general public and do whatever it wants. Like a thief, it does things covertly in China. But outside of mainland China, everything is done in broad daylight, all the information is accessible, yet the CCP still tries to do things covertly. 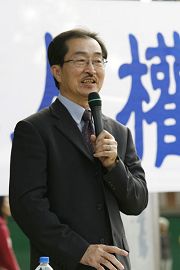 Prof. Young at the rally to support 30 million Chinese quitting the CCP in Taichong, Taiwan 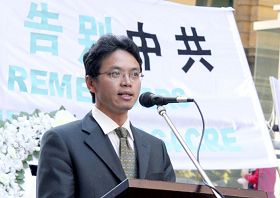 Chen Yonglin, former diplomat of the CCP in Australia quitting the CCP

Upon learning about the slanderous letter, Mr. Chen Yonglin, former diplomat of the CCP in Australia commented that when the CCP uses the methods with which it treats Chinese people--methods such as violence, terror and threats--in its foreign relations, it will certainly become more difficult to succeed.

Prof.Chang Chin-Hwa, of the graduate institute of Journalism, National Taiwan University, said that the DPA's shows aim to promote the exquisiteness and virtue of the Chinese culture, but the CCP's criticism of the show indicates that it opposes Chinese culture. She stressed that the CCP might underestimate the courage that western society has to safeguard freedom.

When commenting on the audience's and professional critics and artists' warm responses to the DPA's performances, Shen Ru, an expert on Chinese issues living in Australia said, "The DPA displays the profound meaning of authentic Chinese culture with dances and music, and conveys the message of the truthfulness, compassion and beauty of authentic human arts to the audience. By watching the DPA's performances, many westerners have gained deeper understanding of the authentic Chinese culture and the future direction of human arts. The Holiday Wonders is the most precious gift presented to people in the US."

Commenting on the threatening letter to the Assemblyman, Shen Ru said, "The CCP's slander shows its deep fear before its disintegration. When people's original true nature is awakened, they will differentiate between good and evil, so the CCP's slandering can only serve a reverse purpose. In particular, after the CCP's organ harvesting from living Falun Gong practitioners was exposed, more and more people have become clearer about the CCP's fondness for killing. In addition, the wide spread of the Nine Commentaries on the Communist Party in China has inspired over 30 million Chinese to quit the CCP and its affiliates. The Human Rights Torch Relay has been traveling around the world with a strong message that the Olympics cannot co-exist with crimes against humanity in China. The CCP regime is about to collapse, so they are desperate. The letter from the consulate indicates the CCP's frantic attempt to destroy more people before its demise."

“Not in the Name of China”