(Clearwisdom.net) The 12th International Spiritual Science Show was held by the Thai Department of Health at Surasakmontri School on December 8-10, 2007. About 100 organizations from medical and religious communities demonstrated their products. Falun Gong practitioners from Thailand also participated at the show. 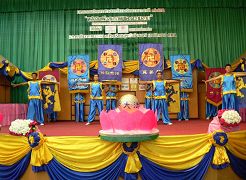 Practitioners perform at the show 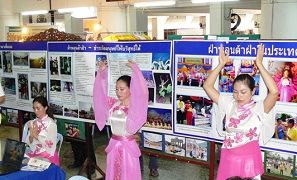 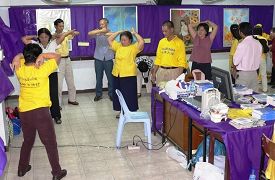 The theme of the show was "Spiritual Powers Lead to Physical Health." Falun Gong practitioners set up a booth and introduced the practice for the many people who attended the show.

On the second floor of the hall, practitioners held a "Truthfulness-Compassion-Forbearance" Art Exhibition. Many people took photos of the artworks and highly praised them. Practitioners also demonstrated the exercises, which attracted many attendees. Some people learned the exercises and some asked for detailed contact information.

Practitioners' performances, including traditional Chinese dance, waist drum playing and singing, were warmly welcomed by the attendees. At the end of the show, the organizers awarded the practitioners.