On September 29-30, the 2007 Holistic Health Show was held at the Convention Center in Sacramento, California. Local Falun Gong practitioners took part in the show and introduced Falun Gong to the public. 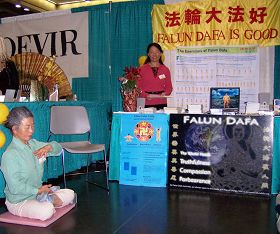 The health show was a commercial one. The organizers normally charged every booth a large fee, and most participants were businesses. Some people asked how Falun Gong practitioners paid for their booth. A practitioner answered, "We are non-profit and every practitioner is doing the work voluntarily. We also don't charge people to learn. The organizers know this, and they know about the persecution. So they charge us very little." One of the organizers came over to practitioners' booth. He accepted Falun Gong informational materials and expressed his support to the practitioners.

Many products at the show cost a lot of money, and attendees are accustomed to the high prices. Some people asked practitioners how much they charge. They were happy, yet surprised at the answer, "It is free."

“Germany: Supporting 26 Million Withdrawals from the CCP in Munich (Photos)”