The annual big fair (Hammefest) held in Ritterhude, a small town near Bremen, Germany attracted many people from surrounding cities. Falun Gong practitioners from Bremen held a three-day Information Day activity from August 31 to September 2, 2007. As on previous occasions, they brought Falun Dafa's beauty and its unique characteristics to the visitors. At the same time, they told people about the violent persecution of Falun Gong committed by the Chinese Communist Party (CCP). 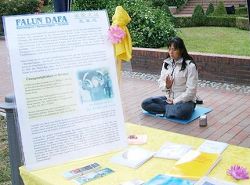 Falun Gong booth in front of the city hall 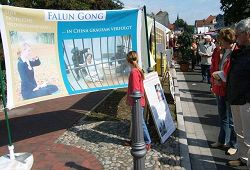 People are shocked at seeing the CCP's brutality

Falun Gong practitioners were arranged to demonstrate the exercises at the entrance to the city hall. Their peaceful exercises attracted many visitors to watch and take photos.

Many tourists were horrified after looking at posters and fliers with information about the state sponsored, although carefully concealed, forced organ harvesting from living Falun Gong practitioners that is taking place right now, just before the start of the Beijing Olympics in 2008.

One young couple had already received information in another city about the organ thefts occurring in China. They were happy to meet more Falun Gong practitioners in the town of Ritterhude. Two weeks earlier, the two University students had encountered the Human Rights Torch Relay (HRTR) in Berlin. The HRTR is being sponsored by the international human rights organization CIPFG (Coalition to Investigate the Persecution of Falun Gong), which is composed of more than 300 politicians, physicians, attorneys, journalists and former Olympic athletes, in addition to human rights activists from various countries. The HRTR calls for a boycott of the 2008 Olympics in China, a country where the most vile and brutal human rights violations are routinely practiced. They demand an immediate end to the persecution of Falun Gong and to forced organ harvesting from living, unjustifiably detained Falun Gong practitioners in forced labor camps.

Just like the happy couple, another citizen of Ritterhude was glad to see the practitioners again. He had learned to do the exercises two to three years ago and started to practice then. Before leaving, he promised to call and said that he still had all the books. Two ladies were planning to attend group practice in nearby Bremen. They had become interested in the gentle but powerful exercises after they learned more about the true cultivation practice called Falun Gong. They heard about the free teachings, about its roots in prehistoric times and the underlying cosmic principles of Truthfulness-Compassion-Tolerance.

There were also some children who had learned the exercises at Falun Gong information booth last year and were happy to be able to try them again. The karmic relationship with Falun Gong was palpable in some of them. For example, one little girl was sitting in the lotus position and practiced the fifth exercise, looking very peaceful despite loud music coming from the left and right of the parade route.