At 9:00 a.m. on the first day of 2007, a group of western Falun Gong practitioners went to Chinatown in Lima, the capital of Peru. They greeted Chinese Peruvians in Chinese, "Happy New Year!" and presented a brochure of the Nine Commentaries on the Communist Party as a precious gift. Those Chinese who received the brochure were touched by their sincere gesture and thanked the practitioners. 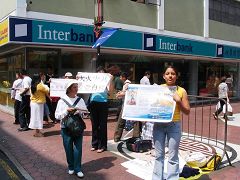 The practitioners' activity in Chinatown caught the attention of some Chinese Communist Party (CCP) sympathizers. They called security personnel to attempt to disperse the practitioners. When the security personnel started asking questions, the audience spoke out, "They don't sell anything or violate any rules, they only distribute flyers and literature. Why are you hassling them?" The security person said he knew Falun Gong. He then pointed at the banner on ground and said, "You cannot place it on the ground." The practitioners replied with smiles, "Can we hold it?" He did not respond. After watching a while, he said to one practitioner quietly, "You are so peaceful and kind. Why do those Chinese not like you?" The practitioner handed him a flyer and explained the facts of the CCP's persecution of Falun Gong.

More practitioners came and joined the activity. They held the banners worded "Heaven Destroys the CCP, Quit the CCP to Save Yourself," "The CCP is Not China," and "Loving China Does Not Mean Loving the CCP." Many Chinese appeared surprised when they saw the banners. Several Chinese came by taxi and stopped near the practitioners. They watched for a few minutes and left with a copy of the Nine Commentaries. The practitioners sent forth righteous thoughts to eliminate the CCP's evil factors and to facilitate people accepting their precious gift.

As the activity concluded, the practitioners encouraged each other to clarify the truth and move forward in cultivation diligently.