Mr. Zhang Hongwei refused to give up practicing Falun Dafa and was savagely tortured at the Jilin Prison. He was held in solitary confinement for two years and five months, during which the guards immobilized him in a bed and further tortured him with a method called the Big Hang Up. [1] They brutally beat him, and his current condition is critical. He was diagnosed with type III tuberculosis of the lungs, pleurisy and heart disease. The Prison Administration Bureau also rejected Zhang Hongwei's application for medical parole, because Zhang Hongwei's lungs are not perforated. They then denied Zhang Hongwei's family's right to visit him. Wang, an officer in the Education Section, said Zhang Hongwei could no longer eat. Perhaps this is the reason the prison authorities do not allow family visits. 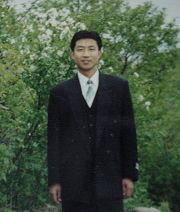 Zhang Hongwei's mother-in-law took Zhang Hongwei's child to Jilin Prison on July 14 to see him. The authorities told them that they were not allowed to visit for three months. When asked who made the decision, the officials said the prison did. Zhang Hongwei's family called the Education Section, Prison Politics Section and the head of the prison, but no one answered the phone. The Education Section and the division where Zhang Hongwei is held both said that the section head, the guards and the division head were not available. Other family members went to the prison and waited outside the office building. They saw the guards from the division where Zhang Hongwei was held, and they also saw Wang Yuanchun from the Education Section. Wang Yuanchun said the reception office didn't allow visits because the family had said something that they were not supposed to say on their previous visit to the prison. The "inappropriate" thing the family uttered that led to the barring of visitations turned out to be the word "cultivation."

The family went back to the prison on July 17, but was again turned away. The family talked to Liu Wei, deputy head of the prison, and asked to see Zhang Hongwei's x-rays. Liu Wei said, "The family doesn't have the right to see those." The family confronted Liu Wei about locking Zhang Hongwei in solitary confinement for two years. Liu Wei denied it and said, "Don't believe rumors."

Jilin Province Prison Administration Bureau: Tuberculosis didn't result in lung perforation, so there will be no medical parole. We won't take responsibility for his death. 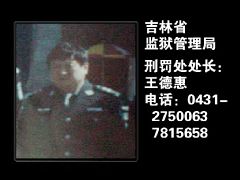 Zhang Hongwei's application for medical parole was delivered to the prison administration bureau after May 1, 2006. Around May 20, 2006, Zhang Hongwei's family went to Wang Dehui, head of Criminal Punishment Division at the Jilin Province Prison Administration Bureau. They went to talk to him for four days, but he refused to approve it. On the fifth day, the family petitioned Bai Xuejie at the Criminal Punishment Division, who said, "We may not approve medical parole. There are documents that set requirements for us. We can only approve it if his lungs are perforated or if he coughs blood." The family asked, "Wouldn't he be near death if he was in that condition? Who will take the responsibility if something happens to him?" Bai Xuejie said, "No one!"

The family asked Wang Dehui the next day whether he has approved the application. He replied, "I'm telling you that I didn't approve it! Go ahead and sue me!" Zhang Hongwei's wife said, "My father passed away because the Judicial Bureau didn't approve his application for medial parole." Wang Dehui said, "That has nothing to do with me." The family said, "We'll hold you responsible if anything happens!"

Zhang Hongwei is in grave condition and can die at any time, and yet the Prison Administration Bureau and Jilin Prison still refuse to release him. They used all kinds of excuses to deceive his family. Liu Wei, deputy head of the prison, refused to let the family look at Zhang Hongwei's chest x-rays and said, "You have no right." Zhang Hongwei's family is his legal representative, and they have the right to know Zhang Hongwei's situation when his life and personal freedom are threatened. Liu Wei is responsible for Zhang Hongwei's illness and will be held accountable for the injuries and subsequent consequences the prison has caused Zhang Hongwei.

We call upon the Coalition to Investigate the Persecution of Falun Gong (CIPFG) and all kind-hearted people to pay attention to the dangerous situation of practitioner Zhang Hongwei and help secure his release.

Almost all Dafa practitioners who were released on medical parole from Jilin Prison have passed away. Dafa practitioners inside and outside China can cooperate with each other and together sue Liu Wei, deputy head of Jilin Prison. We will investigate the criminal conduct of all institutions, organizations, and individuals involved in the persecution of Falun Gong.

The following is a list of officials responsible for this incident of persecution and their phone numbers:

[1] Big Hang Up: During this torture, Dafa practitioners' hands are handcuffed and then pulled from behind the back and hung up on a hook high above the ground. The feet are made to hang just above the floor. Practitioners that are hung up frequently have reported passing out from the pain.