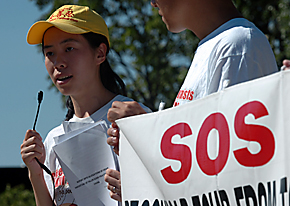 Falun Gong followers across the country want Canadians to stand up and voice their opposition to the communist Chinese government, which has allegedly harvested the vital organs of thousands of imprisoned dissidents since 1999.

"We believe Canadians should stand up to this kind of atrocity," said Marvin Ye, one of four volunteers with the Global Mission to Rescue Persecuted Falun Gong Practitioners (GMRPFGP) who have been touring Manitoba and Saskatchewan in an effort to educate Canadians about what they say is a blatant disregard for human rights in China.

The group stopped in Brandon yesterday outside City Hall to present its case to Westman leaders and the public.

Ye said he was arrested four times by Chinese police because he practiced Falun Gong, also called Falun Dafa. The last time he was arrested in 2001, he was put into a work camp for a year and a half.