(Clearwisdom.net) On Friday June 2 2006, Falun Gong practitioners from Belgium were invited to KTA Senior High School of Technology to introduce Falun Dafa to students in grades three and five as part of a project the students are doing on different cultures. 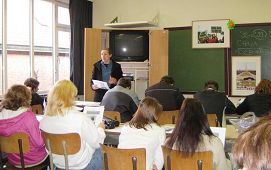 During the activity, forty students were divided into two groups. First, practitioners introduced Falun Dafa to one group of students and then demonstrated five sets of Falun Gong exercises. Another group of students listened to a practitioner talk about the history of the Chinese Communist Party and its cruel persecution of Falun Gong. After a break, the two groups switched places. Some students were very interested in the activity and asked questions about Falun Gong and the persecution, to which practitioners gave detailed explanations.

A practitioner told teachers and students how Falun Gong has changed her life, explained how Falun Gong sprang up in China and then spread rapidly, and about the persecution which Jiang Zemin started in 1999. The facts of the persecution were related in a song "We Want Freedom for the People" sung by "Yellow Express", a band from Sweden. The students could understand the meaning of the song when reading the lyrics in English with detailed interpretation in Dutch by a practitioner. After that, a practitioner read a well-written article about how the CCP persecutes Falun Gong practitioners and trades in organs harvested from live practitioners. After hearing the article, a student felt especially uneasy and said that he couldn't understand how people could treat other people like this.

When a practitioner was talking about the collection of signatures to support an end to the persecution and the end of organ removal from live people, a student at once found a pen and took down the website of the petition. If the petition form had been available then, she would have signed it immediately. And some other students kept on asking about the persecution.

Finally, all of them together watched the film "Sandstorm", which left a deep impression on everyone. Because of the time limit, only a part of the film was shown. Practitioners gave a copy of the film to teachers so that they could see the rest of it when they had time. The practitioners also showed them pictures of Falun Dafa practitioners practicing Falun Gong in both China and the USA.

When asked what they thought of the activity, the teachers said that it was very successful and that the students all paid much attention to it. One of the teachers promised that he come to the practice site.