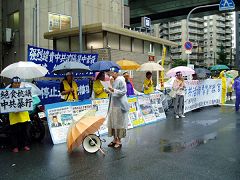 Hunger striking in the rain

Although it was raining, many practitioners attended the activity. At 11:00 a.m., practitioners made the hunger strike announcement, "We have started this hunger strike with great solemnity, not only for the fellow practitioners who were persecuted to death in Mainland China, but also to wake up the consciences of the Chinese people who have been deceived by the Chinese Communist Party (CCP) and to wake up the organizations and individuals that cooperate with the CCP for temporary profits." "People, please stand up. Together with Falun Gong practitioners, let us condemn the CCP brutality and stop the anti-human crime of harvesting organs from living Falun Gong practitioners. Let us stop the CCP persecution of Falun Gong. People, please make this important and correct decision in your life."

Many people showed respect for the practitioners holding the hunger strike in the rain. Citizens were shocked when they learned the truth about the persecution and encouraged them to persevere.