On July 15, 2006, practitioners from Montreal and Ottawa rallied in front of the Parliament building to "clarify truth" and protest the seven-year-long persecution of Falun Gong in China. Former diplomat and Chinese expert Brain McAdam attended the rally in person.

After an independent investigation report was published, five members of Parliament wrote letters to the Canada Falun Dafa Association expressing their support. They were: Nina Grewal with the Conservative Party, Stephen Owen with the Liberty Party, and Bill Siksay, Olivia Chow, and Wayne Marston with the New Democratic Party.

He said, "Historically, when Communist authorities want to eliminate dissidents, they declare the suppressed people no longer human beings. From this standpoint they can treat those they are suppressing like Hitler did the Jews, using any methods they choose. Torture them, confiscate their properties, etc. From when it did this to the landlords during the land reform movement to present, their tactics have not changed."

McAdam confirmed the independent investigation report and said he had no question about its being 100 percent accurate. 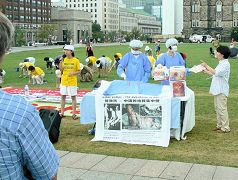 Some passersby said they couldn't tolerate such crimes as those of the Chinese Communist Party's harvesting vital organs from living Falun Gong practitioners. One lady from Winneburg said, "I can no longer ignore the existence of injustice and evil in the world. I want to do my best to stop the evil."

“Sydney: Falun Gong Practitioners Expose the CCP Brutality and Call for a Complete End of the Persecution of Falun Gong (Photos)”