Sydney: Falun Gong Practitioners Expose the CCP Brutality and Call for a Complete End of the Persecution of Falun Gong (Photos)

At the press conference, John Deller, president of the Falun Dafa Association in New South Wales, called upon the Australian government to publicly condemn the CCP crimes of harvesting organs. He also called upon the Australian government and citizens to support the "Coalition to Investigate the Persecution of Falun Gong in China." He urged the CCP to open all the labor camps, prisons, and detention centers for independent investigation and end the persecution of Falun Gong practitioners.

Li Ying: Calling for Help to Rescue Her Brother, Who is Illegally Imprisoned by the CCP

At the press conference, Falun Gong practitioner Li Ying, who had been imprisoned and persecuted by the CCP, told of her family's experiences of being put in labor camps, including her mother, sister, brother and herself. Her brother, Li Liang, has been jailed in labor camps many times since July, 1999. He is currently in Shuangkou Labor Camp in Tianjin. People have lost contact with him. The labor camp doesn't allow her family to visit him, and Li Ying and her family are very worried. 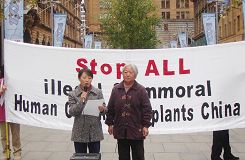 Li Ying and her mother relate their experiences of being persecuted

Li Ying said, "I am very fortunate. The Australian government, my husband and other kind people rescued me to Australia. But my brother is jailed in the labor camp. The last time I saw him was in April 2006. After that, my family was not allowed to visit him. We have not heard anything from him since then. We are very worried about him. I call upon kind Australians to help us to rescue my brother.

At the press conference, Zeng Zheng, who had been persecuted by the CCP, said that she knows very well about the dangerous situation that Falun Gong practitioners are in. She previously had liver disease, but practicing Falun Gong healed her disease. But she was arrested and jailed in the labor camp due to a family letter which was published on the Internet. Her husband, a non-practitioner, was also involved and jailed.

Zeng Zheng was arrested in May 2000 for practicing Falun Gong, and was imprisoned in Chongwen Detention Center in Beijing. There were more than twenty practitioners jailed with Zeng Zheng. Most of them disappeared and people never heard from them again. A 45 year old female practitioner from Heilongjiang was tortured to death in the labor camp.

Zeng Zheng was later sent to the Xin'an Forced Labor Camp. In this labor camp, doctors checked her blood and asked about her history of diseases. She didn't know why the labor camp offered this physical examination. She and other Falun Gong practitioners were tortured badly in the labor camp, so she didn't understand why the labor camp cared about her health. She realized recently, after the CCP's harvesting organs from living practitioners was exposed, that she almost became a victim of the organ harvesting.

Fifty years ago, people promised not to let the Nazi's genocide happen again, but it is happening again in China today. With tears, Zeng Zheng said, "I hope that the Australian government and all the other governments will help to stop this persecution. Otherwise it will become a shame for China, Australia and everyone."

Zhang Zhigang: Stand Together to Stop the Evil "That We Have Yet to See On This Planet"

Zhang Zhigang, who graduated from Tsinghua University, told his experience of being persecuted at the press conference. Zhang Zhigang started practicing Falun Gong in 1996, and he follows the principle of "Truthfulness-Compassion-Forbearance" in his daily life. He went to the graduate school in Tsinghua University and had excellent grades. During the persecution of Falun Gong, he refused to write the "guarantee statement" renouncing Falun Gong, so he was forced to watch the videos and other material, which slander Falun Gong. On April 25, 2000, he went to Tiananmen Square to appeal for Falun Gong and open a banner reading "Falun Dafa is Good." Because of this, he was beaten by policemen and jailed for one month. He was also expelled from school. 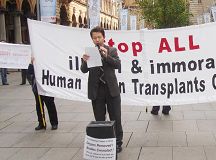 Zhang Zhigang said, "I had never imagined that a student like me, who went to the best university with great grades, would be beaten and jailed for believing in "Truthfulness-Compassion-Forbearance."

Zhang Zhigang said that if he had not escaped to Australia later, he probably would have become a victim of organ harvesting. Zhang Zhigang called upon everyone to stop this evil that "We have yet to see on this planet."

Kay, a Western Falun Gong practitioner, said that her father escaped from the Soviet Union to Australia several decades ago. So her father understands the CCP's brutality. Kay started practicing Falun Gong eight years ago. She feels the peacefulness of Falun Gong and benefits a lot from it. Kay and thirty five other Western Falun Gong practitioners from different countries went to Tiananmen Square to appeal for Falun Gong and opened a banner reading "Truthfulness-Compassion-Forbearance" in November 2001. A few seconds after they opened the banner, the police rushed them and took all of them to the police station. Several were beaten by the policemen. One practitioner's finger and nose were broken. Some female practitioners were sexually harassed. Kay was beaten and deported. 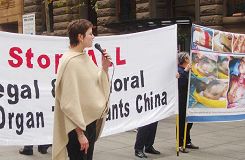 Kay said that the persecution and organ harvesting should not happen in any country. If everyone keeps silent about it, then the crimes will continue. Kay called upon the Australian government and media to investigate the CCP crimes with other investigation groups.

Call for Help to Stop the CCP's Crimes

Since the CCP's harvesting organs from living Falun Gong practitioners was exposed, Falun Gong practitioners have been clarifying the truth and collecting signatures on a large scale. They are calling for help to stop the CCP's crimes. Many citizens are shocked by the CCP's brutality and can not believe that such violent crimes are occurring on this planet. Many people want to know more about it, and many signed their names to support Falun Gong.

So far, more than twenty people of justice from Australia, including lawyers, congressmen and people from the religious community have joined the "Coalition to Investigate the Persecution of Falun Gong in China." Falun Gong practitioners call upon more governments, media, organizations and individuals to make an effort together to end the illegal imprisonment of Falun Gong practitioners and the seven year long persecution.

“South Australia: Practitioners Condemn Live Organ Harvesting, Call on People from All Walks of Life to Work Together to Stop the CCP's Persecution (Photo)”