(Clearwisdom.net) On July 14, Holland TV Channel 2 broadcast a program about the Chinese Communist Party’s (CCP) atrocities of harvesting organs from living Falun Gong Practitioners. The title of the program was "Organ Harvesting in China." The program stated that a report from Canada has confirmed that large-scale organ harvesting from living Falun Gong practitioners and induced death does exist. The program interviewed one of the investigators, former Canadian Secretary of State (Asian-Pacific) David Kilgour, Vice President of the European Parliament Edward McMillan-Scott, and practitioner Ying Chen who was persecuted in China. 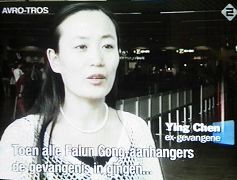 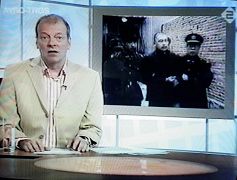 During the interview, Mr. Kilgour restated some details from the report and said: "Findings of the investigation are shocking and we can hardly believe these facts. This is a severe crime against humanity. Making profit from Falun Gong practitioners’ bodies, even the Nazis didn’t do this." Kilgour also called on the international community to boycott the 2008 Olympic Games. He said: "If the regime doesn’t stop such crimes before 2008, will you attend the Olympic Games? I am sure that I won’t and I hope many people won’t go."

During the interview, Vice President of the European Parliament Edward McMillan-Scott said that he went to China several months ago and talked with a number of Falun Gong practitioners. He emphasized that the results of his investigation into the CCP’s persecution of Falun Gong are shocking.

Ms. Ying Chen recounted her experience in a Chinese prison where she was injected with harmful drugs and tortured. She was also subjected to a special body examination.

In the past several days, about a dozen Dutch media outlets have reported on the CCP’s atrocities of harvesting organs from living Falun Gong practitioners. One of the reports pointed out that organs from China come from Falun Gong practitioners who are being killed upon demand for specific organs. According to the report, the Holland Organ Transplant Association stated that they will not purchase organs from China and they are advising Dutch citizens not to go to China for transplant surgery.