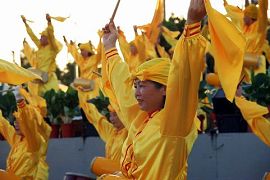 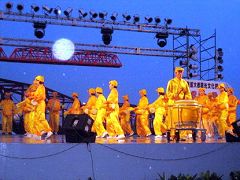 On July 9, at around 4:00 a.m., more than 100 practitioners in yellow Falun Dafa T-shirts meditated on a large stage set up for the Bridge Festival. The serene scene attracted the attention of many people who were out for morning exercises. Among the practitioners, the youngest was just nine years old while the oldest were in their 80s. Many people asked, "Where can we learn the exercises?"

On the evening of July 9, the Flag and Drum Troupe from New Tang Dynasty TV performed.

One photo of the practitioners’ performance showed countless revolving Falun, which also symbolize the widespread seeds of "Truthfulness, Compassion, Forbearance" in the county. The practitioners hope that their performance will inspire more kindhearted people to support Falun Dafa and join the practice.