On July 4, the City of Plano held its 26th Independence Day parade on Independence Parkway. Practitioners' waist drum and dance troupes participated in the parade and their performance was warmly received by local residents. 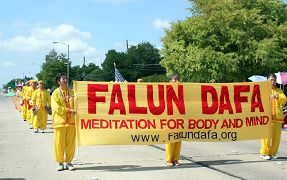 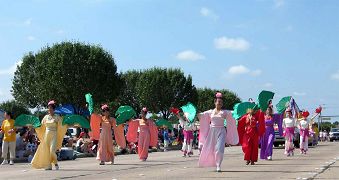 Plano is located north of Dallas and has many Chinese residents. Though it is the hottest season in Texas, the spirit was very high. The sizable Falun Gong procession was very eye-catching, presenting a unique Asian culture.

The practitioners' procession was lead by a giant "Falun Dafa" banner which was very eye-catching. A waist drum team of 9 practitioners followed behind. Children along the way were waving their arms, mimicking the drummers' playing. Behind them was a dance troupe of ten ladies. Many spectators acclaimed: "Beautiful!"

Then came a delicate float which had giant "Falun Dafa" and "Truthfulness-Compassion-Tolerance" banners displayed on both sides. The bow and tail of the float were decorated with long silks of red, blue and white colors. Several lotus flowers of different color were placed on the float while 6 practitioners in yellow exercise suits demonstrated the Falun Gong exercises. The float proceeded slowly in the crowd, forming a beautiful image. Many people were very interested in learning the exercises.