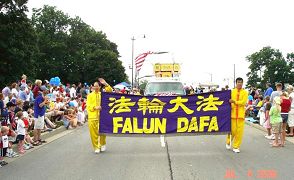 On July 4, 2006, Falun Gong practitioners attended the Independence Day parade in the city of Carmel. The banners with "Falun Dafa" and "Truthfulness-Compassion-Forbearance" and the beautiful float were very eye-catching. Practitioners demonstrated the exercises on the float. At the center of the float there was a big Chinese-style lantern, which had the Chinese characters for "Falun Dafa" and "Truthfulness-Compassion-Forbearance," and pictures of fairies on it. A seven-year-old practitioner demonstrated the sitting meditation on the float. 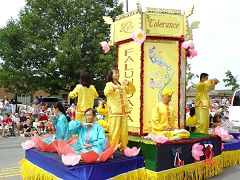 As in previous years, the spectators enjoyed the Falun Gong practitioners' entry very much.

Two thousand flyers were passed out before the parade was half-way through. The citizens of Carmel experienced the beauty of Falun Dafa.