On May 30, 2006, practitioners from Sydney, Melbourne and Queensland held a press conference in front of Parliament House in Canberra to support the CIPFG and its plans to send a team into China to investigate organ harvesting from live Falun Gong practitioners. Labor Party MP Chris Bowen attended and delivered a speech. 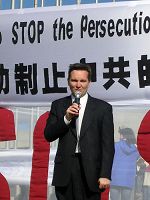 After the press conference, practitioners entered parliamentary buildings and explained the facts to Members of Parliament (MP). They focused on the live organ removal going on in CCP concentration camps.

A practitioner said, "We met seven MPs and some assistants and staff of MPs. All the MPs we met today supported us. Some MPs said that CCP's live organ removal is too barbaric. They said they would write to the Prime Minister and ask the Australian government to investigate the issue."

At noon, the practitioners held a press conference in front of Parliament House.

MP Chris Bowen came to the press conference and gave a speech. He said that practitioners are brave to stand out to expose crimes. He encouraged them to keep up. He said, "It's an honour for me to come down and just spend a few minutes with you and give you a few words of encouragement."

John Deller, the chairman of the Falun Dafa Association of New South Wales Province explained the reason for the conference, and quoted data to prove that the donors of most of the organ transplant in China are practitioners.

Mr. Deller said: "From 1998 to 1999, before the persecution officially started, the number of the transplant in China was not that large. But now, the Chinese transplantation website recorded that 5000 kidney transplants a year are taken place. There are 15,000 to 20,000 in total transplant a year. So the question has to be where did these organs come from?"

Deller continued, "Amnesty International reports that there has only 1770 executions been recorded, and 3900 death sentences. Even if we take the worst case scenario with some human right watch said that, 8000 prisoners' executed in China each year. There are still not enough donors to make 20,000 transplants a year. So the figures for the number of transplants in China indicates there is obviously an organ bank. There are people being used as products. We know that Falun Gong practitioners are kept in concentration camps and labor camps since 1999. As far as I know, there are at least one hundred thousands to two hundred thousands. There could be more. There could be a million practitioners. When you look at the number of transplants in China since the beginning of the persecution, you understand where these organs come from. There is no other explanation."

An Qi, representative of the CIPFG, the Coalition to Investigate the Persecution of Falun Gong, announced that various organizations and individuals have joined in the coalition. They include Father Peter Caruana, Fang Yuan, the chairman of the Chinese Labor Party, Democratic Allies assembled by the Australia branch of Chinese Labor Party, Chinese Democratic Party, former Democratic movement activist Yang Jun, and former Chinese diplomat Chen Yonglin.