(Clearwisdom.net) During the summertime, parades and cultural festivals are held with greater frequency. Such events provide good opportunities for people to enjoy different cultural and artistic performances, and these are good venues for practitioners to share the beauty of Falun Dafa and raise awareness of the persecution in China. 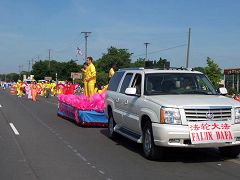 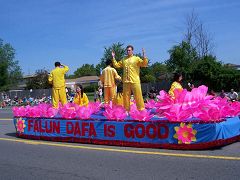 After participating in a parade in Michigan capital Lansing and a cultural festival in Windsor of Canada, in the morning of June 17, Michigan practitioners participated in the Liberty Parade in Canton. Though it was over 97oF, the peoples’ spirit was very high and they lined up along the parade route as early as 8 a.m. The number of spectators was double the amount last year. At the same time, the parade, with more than 90 different groups, also nearly doubled its size.

The practitioners’ float had a new refreshing look, with large pink lotus flowers. Practitioners in exercise suits demonstrated the standing exercises on the float while some sat inside the flowers meditating, giving people a sight of peace and beauty in the mostly noisy parade procession. In addition, the practitioners’ celestial maiden team and waist drum troupe performed to the "Falun Dafa is Good" music. The performance was well-received. Many spectators waved and greeted the practitioners. Among the crowd, there were also many Chinese who waved at and showed support for the practitioners.

Along the parade route, several practitioners distributed truth-clarifying materials. They expressed hope that more people will learn about what Falun Gong is and the Chinese Communist regime’s atrocities of harvesting organs from living practitioners in China so that kind-hearted people will extend their help to end the persecution.