(Clearwisdom.net) On June 23, 2006, the Pingtong County Council passed a resolution entitled "Condemn the Chinese Communist Regime’s Persecution of Falun Gong Practitioners and Illegal Human Organ Trafficking". The council requests the UN and international human rights organizations to deploy a delegation to go to China to investigate the communist regime’s illegal organ harvesting and trafficking and urges Taiwan citizens not to go to Mainland China for organ transplants. 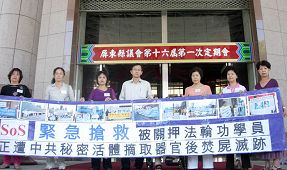 June 23 is the last day of the first convention of the 16th Pingtong County Council, and council member Mr. Pan sponsored the resolution, which was then cosponsored by 4 other council members. The resolution was passed unanimously.

According to Mr. Pan, he has a very good relationship with practitioners and listened to their two presentations on the persecution. He said that he was shocked by the Chinese Communist regime’s atrocities of harvesting organs from Falun Gong practitioners. He believes that the international community and Taiwan should condemn the CCP’s atrocities and help end such practices. Therefore, he wanted to sponsor the resolution, hoping to help end the crimes happening in China. Before the resolution was submitted for discussion, he told practitioners that the resolution would be passed for sure, as the council shall speak out for human justice.

Mr. Pan also told practitioners that he had heard cases in which Taiwan residents went to China for organ transplants in the past several years. Though he didn’t know the sources of those organs involved, he sensed the urgency of the issue after he listened to the practitioners’ briefing on the CCP’s atrocities of harvesting organs for profit. He urged local residents to be cautious and not to receive organs removed from innocent Chinese citizens. In addition, he called on governments of other countries and health organizations to investigate the organ transplant practice in China and called on related entities to inform people not to go to China for transplants, because such organs may come from dissidents murdered by the communist regime.

To stop the CCP’s killing of innocent civilians for organs, the resolution requested the following:

1. Delegate Pingtong County Government to retain the Taiwan Strait Exchange Foundation to pass the resolution to the Chinese government;

2. Request the United Nations and international human rights organizations to deploy experts to go to China to investigate the Chinese Communist regime’s atrocities of harvesting organs from living Falun Gong practitioners. Suggest Taiwan residents not to go to China for organ transplants.