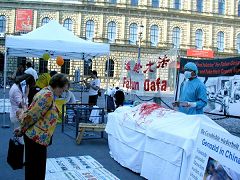 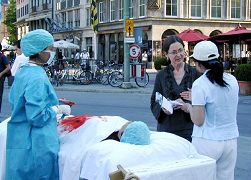 "This is murder. This is disaster. We must stop this crime." Mr. Welinger, who signed his name on the petition to call for the end of the CCP’s persecution of Falun Gong, told this reporter that he had just seen the re-enactment of the CCP’s organ harvesting from live Falun Gong practitioners and the display boards, which showed the truth of Falun Gong.

Many tourists from Taiwan and Hong Kong talked to practitioners. Some of them already signed their names to support Falun Gong in their hometowns. One of them told practitioners that his relative had an organ transplant in Mainland China.

Many local citizens mentioned that they heard the news the previous day that a Chinese person who tried to protect human right in China was tortured by the CCP to disability. German citizens saw the CCP’s brutality through this incident. To them, this is intolerable. They also said that German people should take action to stop the CCP’s persecution of Falun Gong.

A local psychologist and educator, Ms. Julia, told this reporter that she has been interested in China for several decades. Like many young Germans, she was a follower of communism and Maoism when she was young. But after the Cultural Revolution and other things, she gradually saw the evil nature of the Communist Party. Although it was a long and painful process, she learned how to view the CCP. So she believes what practitioners told her about the CCP’s harvesting organs from live Falun Gong practitioners. She said that she supports Falun Gong and hopes they will succeed.