On April 29, 2006, Falun Gong practitioners in Paris exposed the Chinese Communist Party's (CCP) crimes in labor camps and concentration camps to passersby, using a loudspeaker and exhibition boards with photographs. They collected signatures and distributed truth-clarification materials at La Gare Saint-Lazare Railway Station. French people expressed their support and called on all kind people in the world to together stop the CCP from killing Falun Gong practitioners. Many French people came to sign their names on a petition letter to the office of the President of France, urging the French Government to make great efforts to investigate, and urgently rescue Falun Gong practitioners being persecuted in the CCP's labor camps, prisons and concentration camps.

Mr. Philippe Seigneur is in charge of the training office of "Alternative Liberale" in France. On seeing the Falun Gong practitioners' activity, he and his colleagues said they would help them. He told a reporter: "I know that the condition of human rights in China is terrible. As the French media has not reported on it, it is very difficult for people here to know that concentration camps still exist in China now. That is also why people are protesting for their human rights. So, we should help them through legal channels as soon as possible. Those (Falun Gong practitioners) who are being locked up in concentration camps are still suffering now, which can't be put up with!"

Alternative Liberale is a Party newly founded in March with over 1,000 members. Mr. Seigneur said: "We are going to participate in the general election of France in 2007. Of course we are going to talk more about problems of human rights which still exist in China and some other countries. However, what people are doing now is not enough. If people believe in democracy and freedom, they should stop keeping silent concerning people who are still suffering from the persecution on the other side of the earth because of the pressure from both diplomatic and business. We should maintain our dignity and restrain such a persecution from happening."

When being interviewed, one woman, Janine, said: "How horrible these things are! Just like the killing that took place in the Nazi's concentration camps. It can't be tolerated for us to know that a country still has concentration camps now, which is difficult for us who live in a democratic country to understand."

She also mentioned that the French Government should play a more important role in improving the condition of human rights in China, and not only consider doing business with the CCP. Janine said, "We will urge our government to do something to improve human rights in China. We must write letters to the government, and people of all over the world should be mobilized. It is abnormal if something so unjust as concentration camps still exist in the world."

A man named Jacob said, " I am against extremist action. The communist party of China has made so many people lose their lives. It is negative and immoral because it has forced Chinese people to participate in the radical socialism which has killed so many people, which is against society."

He also mentioned, "It is the democratic system that people's freedom shouldn't be forced. We participate in and defend our freedom and the dignity of human being by means of morality and agencies such as the UN. The international community must get involved, rescue those people who are still being locked up and help them escape from the (CCP's) control over their minds."

Another gentleman said, "I am going to China. I think that such a thing shouldn't be happening in our time, which is frightening. The international community should have united and restrained such a thing from happening. Such a deed is extremely immoral and shocking as well."

A woman named Anne said: "The information they have given is very important, the more detailed the better. In this way, more people will know the facts of the persecution and then will take action to stop such persecution."

Another woman said, "I am totally shocked at this. In our time, China still has concentration camps. I hope that people will keep such a thing from happening."

After looking at the information about the CCP's concentration camps, Jacob said, "Falun Gong practitioners are bound to receive support from even more people. Their diligence, bravery and patience will win the victory eventually, through these rallies and protests."

After learning that the CCP has killed Falun Gong practitioners in its concentration camps, a woman was shocked. She said, "Nothing is more inhuman than such a thing, which is too cruel. There is no excuse or explanation whatsoever, for something which is just a terrifying atrocity. Nowadays, it is difficult for people to imagine that such a country as China is treating its people like this. It is also very difficult to hear that such a thing has happened in the history of any one country in this world."

After listening to the practitioners talking about the persecution, a man and his wife showed their sympathy and support for Falun Gong practitioners in China who are being cruelly persecuted by the CCP, and expressed their indignation to its atrocities as well. They said: "Donating one's organs must be agreed by oneself. I have seen from some media that in China, those who have been sentenced to death had their organs removed without their prior agreement, and the authorities even refused to give their bodies back to their family members, which can in no way be permitted. And all actions of removing organs from live people for sale are not forgivable."

As to the crime of the CCP having removed organs from live Falun Gong practitioners, a gentleman said: "I don't think that human being are animals. They (the CCP) are not permitted to remove a part of a human body at will like this and then install it in a body of someone else. There is no excuse for covering up such a crime."

After looking at pictures and reading materials disclosing the concentration camps, one man, together with his family, signed the petition protesting against the atrocities of the CCP. He told the reporter: "I didn't know that Falun Gong is being suppressed now. It is too difficult for us French people to imagine that such a persecution is happening today. It's easier to believe that such an atrocity is a story which happened a long, long time ago. I am very sorry that concentration camps still exist now. Today people have participated in the activity, protesting against concentration camps, and mobilizing all people to stop the atrocities of the CCP regime." 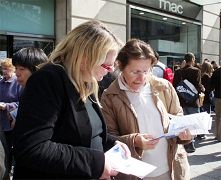 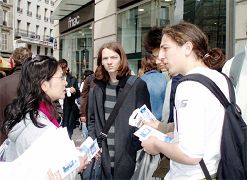 The gentleman continued: "I don't think that our government plays a role on the international stage and influences China, especially when it comes down to economic interest with China. I think that you should clarify the facts of the persecution to more French people, which is a very good way of ending the persecution - because the people's power is huge."

“Sydney, Australia: Falun Gong Practitioners Expose the CCP's Atrocities to the Government and the Media”

“Taiwan: Falun Dafa Has Spread Widely in the City of Tainan (Photos)”