On April 19-20, 2006, Sydney citizens from several social groups held a two-day urgent appeal outside the Australian Prime Minister's Office. Concurrently, over a dozen citizens held a one-day hunger strike to call on Prime Minister Howard to demand that the Chinese Communist Party (CCP) regime allow the team of investigators from the Coalition to Investigate the Persecution of Falun Gong in China (CIPFG) to enter China and conduct a thorough and open investigation into all forced labor camps, prisons, mental hospitals and related facilities. They believe that every minute of delay might be at the cost of lives of more innocent Falun Gong practitioners. 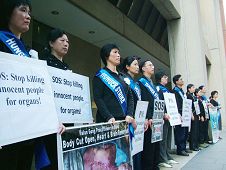 On the morning of April 19, a member of the first team of investigators from the CIPFG, reporter Linda Xu from the Australian Sound of Hope radio station, had her visa application to China rejected. Mr. Wang, who was among the appealers, said that the rejection to Linda Xu's visa application was expected, as the CCP has no courage to allow the free and independent media to investigate this matter. The spokesperson for the CCP's Ministry of Foreign Affairs, Qin Gang, only ostensibly claimed to welcome overseas media, but the media it welcomed are all under its effective control, and were only allowed to enter the places where it has made full preparation. It knows that the CIPFG will immediately see through its deception.

Every Minute of Delay Allows the Murder to Continue

Susan and Carl, who are from The Epoch Times, also jointed the hunger strike appeal. They expressed that on March 9, 2006, The Epoch Times exposed the live organ harvesting from living Falun Gong practitioners in Sujiatun Concentration Camp, and hope that the international community can organize an investigation to look into the matter. According to various investigative information now collected, hospitals and organ transplantation centers in Mainland China are operating overtime to perform organ transplant surgeries. It is obvious that the CCP is hastily destroying the evidence of crimes. Therefore we urgently call upon Prime Minister Howard to demand that the CCP allow the team of investigators from the CIPFG to enter China to conduct a thorough investigation into all forced labor camps, mental hospitals and related facilities to help stop the killing and reveal the truth to the public. Every minute of delay may be at the cost of lives of more innocent Falun Gong practitioners.

Mr. Chen from the Service Center for Quitting the CCP was also among the hunger strikers. He expressed that the CCP abnormally remained silent for three weeks after the revelation of the Sujiatun Concentration Camp, and then invited the overseas media to go to investigate. It can be imagined that when a murderer invites others to come to his house to investigate, what he first wanted to do is to destroy all evidence of the crimes.

Support From the Australian People

An Australian man in his 60s passed by and saw the group of hunger strikers, and showed a thumbs-up and said that he took a flyer the day before and learned about the CCP's atrocities of harvesting organs from living Falun Gong practitioners for profit. He said, "I cried. My heart is bleeding, and in pain. The CCP has done all possible evil deeds, I'm also clear that the CCP is doomed. A new China is coming. I believe it."

A middle-aged Westerner passed by and expressed to the practitioner who handed him a flyer for signature, "As soon as I learned about the CCP's live organ harvesting from the Falun Gong group, I got on the Internet to search for related information. I also signed my name on the Internet to call for an investigation from the international community. Additionally I wrote to Howard to ask him to pay attention to this appalling incident."

A young Australian woman learned about the truth and immediately asked for a bundle of flyers. She said she would give them to her colleagues and friends to let them know what is happening in China and how evil the CCP is, and let them sign the petition and mail to Prime Minister Howard.

“Canada: Practitioners Protest in Front of Chinese Embassy against the Persecution and Commemorate the Seventh Anniversary of April 25 (Photo)”