Canada: Practitioners Protest in Front of Chinese Embassy against the Persecution and Commemorate the Seventh Anniversary of April 25 (Photo)

On the morning of April 25, the weather was mixed rain and snow. At noon, Falun Gong practitioners gathered in front of the Chinese Embassy in Ottawa to protest the Chinese Communist Party's (CCP's) brutal persecution of Falun Gong, and to commemorate those fellow practitioners tortured to death for safeguarding the truth. 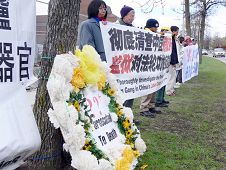 No Violence, No Politics, Peacefully and Rationally Safeguarding Basic Rights and Protesting Persecution

Mr. Li from Taiwan said during an interview, "On April 25 seven years ago, Falun Gong practitioners went to Beijing to appeal for a lawful cultivation environment. But the Jiang and Luo faction created a trap and deceived the public into believing that Falun Gong besieged Zhongnanhai. Actually, the practitioners were peaceful and rational."

Ms. Pu Huilin, who has done business in Canada for many years, started to practice Falun Dafa after the appeal on "April 25" seven years ago. She said, "Many Chinese people overseas do not believe CCP. I did not know Falun Gong until I saw the CBC news on the "April 25" appeal in 1999. I thought that the practitioners' action was great. After the persecution, I tried Falun Gong because I knew that the CCP always lied and called black white. Before practicing, I had incurable illnesses including rosacea and arthritis. After practicing Falun Gong, a miracle occurred and I completely recovered from the illnesses."

Mr. Li Xun, Director of the Canada Falun Dafa Association said, "The CCP has accumulated many persecution means and methods through many political struggles during several dozen years. Chinese people gradually submit to the CCP regime and lose the national spirituality. But when facing persecution, Falun Gong practitioners do not tolerate passively but protest using peaceful means, which gives hope for Chinese nationality."

Practitioner Dai Gengyu said, "Silence connives at persecution. Seven years ago, Falun Gong practitioners stood up to protect belief and dignity. They called for justice and conscience not only for themselves, but for all people. It has been demonstrated that practitioners have continuously followed Truth, Compassion, Forbearance, and clarified the truth to all circles, calling for an end to the persecution. It is also a process of calling for conscience."

Mr. Li said, "For seven years, the exposed persecution has been escalated continuously, including killings, rapes, and live organ removals from Falun Gong practitioners. In such brutal persecution, Falun Gong has not succumbed. The practitioners' righteousness and the CCP's evilness show more contrast. The practitioners' peace and rationality move more Chinese people to recognize the CCP's evil nature and renounce it. More than ten million Chinese people have publicly renounced the CCP."

“Korea: Practitioners Clarify the Truth to the Media and Expose the CCP's Wicked Nature (Photos)”