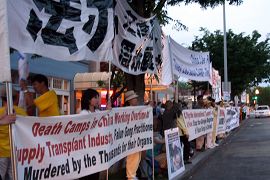 On the afternoon of April 19, Falun Gong practitioners from Taiwan held truth-clarification activities near the hotel of Hu's entourage.

A member of the welcome crew continued to sing songs through a speaker. He tried to drown out the Falun Gong practitioners' voice of "Falun Dafa Is Good." Practitioners didn't want to fight with him. After they sent forth righteous thoughts, a policeman went over and stopped the man from singing because he was too loud.

Police cars blocked the roads except for one at around 10 p.m. A motorcade drove by, and Falun Gong practitioners held up their banners and shouted, "Falun Dafa is good!" "Stop persecuting Falun Gong!" The Chinese officials entered through the back door of the hotel in front of the practitioners. As practitioners kept shouting, a couple of American policemen gestured to tell them to shout louder. They also gave the practitioners a thumbs-up.

“Australia: We Will Let All Citizens Know about the CCP's Atrocities Through Radio (Photo)”