Australia: We Will Let All Citizens Know about the CCP's Atrocities Through Radio (Photo) 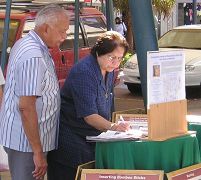 Caption: A senior signing practitioners' petition to condemn the atrocities of the CCP

(Clearwisdom.net) To raise awareness of the CCP's atrocities of organ harvesting from living practitioners detained in concentration camps and labor camps, practitioners in a southwest Sydney suburb have been holding activities frequently at local train stations and business centers. Many civilians are shocked by the inhuman crimes and very concerned.

A reporter of ADVERTISER interviewed practitioners. When a practitioner told the reporter the CCP's crimes of harvesting organs from living practitioners, a passerby told them that she once worked in an Australian organ transplant hospital and she believed that the crimes were real. Though she was reluctant to leave her name and phone number, she said that her hospital once had many groups of Chinese students and they were all sent out by the Chinese government. All those students came to learn organ transplant techniques. She said, "Think about it. In China, how many people can afford organ transplants, especially liver transplants? Why would the Chinese government send out so many people to learn this technique? There must be a secret behind it."

To stop the CCP's atrocities as soon as possible, practitioners have also contacted their federal representatives, provincial representatives, newspapers and radio stations. Wherever they have been to, people were shocked by the CCP's abhorrent crimes. In a city radio, practitioners played a recording of the Sound of Hope's phone interviews, in which a number of Chinese doctors confirmed that they use Falun Gong practitioners' organs, staff members of the station cried. They told practitioners: "We will let all residents know about these atrocities through our radio broadcasts."