Refuse the Tour of Deception, Comprehensively Investigate the Facts

(Clearwisdom.net) According to recent reports in the Western media, officials from the U.S. Embassy in Beijing and the Consulate in Shenyang toured the facilities in Sujiatun with permission from Chinese government officials. They did not find any evidence that the hospital has been used for abnormal purposes. The tour reminded us of the concentration camp Theresienstadt in Nazi Germany.

In June 1944, the Nazis permitted the Red Cross to tour the Theresienstadt concentration camp. The Red Cross officials saw a peaceful, beautiful community with cafes and shops, freshly painted rooms, and plazas with nice landscaping. The visitors even enjoyed a performance of the children's opera. No one could believe that this was a part of the massacre plan. The Jews there faced genocide. The show so successfully fooled the rest of the world that the Nazis even produced a propaganda film on the concentration camp, showing how well cared for the Jews were in the Third Reich. However, quickly after the film was completed, the producer and most of the actors were deported to Auschwitz and executed.

Today, the Chinese Communist Party, which is extremely skilled at deception, is also putting on such a tour, similar to the tour they arranged during the SARS epidemic. No one will leave evidence of their crimes at the crime scene and invite investigators to see. Trying to learn facts on a tour controlled by the CCP is like asking a tiger for its fur. Westerners may have difficulty imagining what lengths the CCP is willing to go to cover up the truth to deceive the international community.

In February 1972, when President Nixon visited China, he wanted to go to the Great Wall. A heavy snow fell on Beijing, and the road was covered in snow. On the evening before and the morning of Nixon's visit to the Great Wall, a few hundred thousand Beijing residents and peasants were mobilized to shovel the snow along the 50-mile route between Diaoyutain National Guesthouse, where Nixon was staying, and the Great Wall at Badaling. The City of Beijing used all of the street maintenance trucks to disperse salt on the road. On that day, the Great Wall at Badaling was closed to the public, but government officials and some common people were dressed up as Chinese visitors and pretended to play cards outdoors in the dead of winter. Some of them also carried tape players, a luxury item at that time, and did exercises with the music. When Ms. Nixon visited a children's hospital, all of the doctors, nurses, and children were required to wear new outfits, and the children even wore make-up. Their daily toys were taken away, and new toys were put on for display. 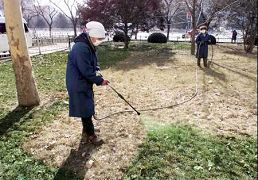 If this level of trickery is used in routine visits, imagine what the CCP would do when foreign officials visit a concentration camp to investigate such horrors as organ harvesting. The difference is, the persecution of Falun Gong is not a decision of one certain government official or the local government, but a persecution engaging the entire CCP system. During the persecution, the CCP used all kinds of extremely cruel and despicable means. Would the CCP not try to cover it up?

We commend the U.S. government for not believing the CCP's denial of the existence of the concentration camps, and requesting to see the site of the persecution. However, if the location is determined by the CCP, and the tour is arranged by CCP officials, the investigation would yield nothing. When the CCP permitted U.S. government officials to visit the hospital in Sujiatun, everyone knew that there would not be any evidence left. It would not take more than a day for the CCP to move several thousand people, but the CCP would not allow people to visit the next day in order to have time to destroy the physical evidence. The CCP did not publicly deny the existence of the concentration camp at Sujiatun until three weeks after the story broke. In addition, what is the difference between an operation table used for organ harvesting and that for normal operations? What is the proof that these operation rooms have not been used for "abnormal purposes" such as organ harvesting? Is it true that Western governments knew so little about the CCP that they allow themselves to be fooled and used as tools to whitewash the CCP's crimes? If the U.S. government really wanted to learn the truth, they should contact Falun Gong practitioners to find more channels for investigation. Victims of the crimes should have the most inside information.

A spokesperson of the State Department said they are taking the report of Sujiatun very seriously, and have contacted the government of China about it; they have urged the Chinese government to conduct a full investigation on the matter. It appears as though the U.S. government does not have a good understanding on the nature of the CCP. How can we expect a criminal to investigate his own crime? If the CCP were willing to investigate and punish those who commit crimes against Falun Gong, how could the persecution continue for the last seven years across China?

Defending human rights and investigating the facts about the persecution against Falun Gong cannot be achieved with CCP's sanctioning and through visits under its control. It cannot be achieved through just one or two visits. The countless labor camps and prisons in China can be used in the same way as Theresienstadt. In the labor camps and prisons, massive killings and organ harvesting of Falun Gong practitioners can happen anytime. To really learn the facts, we should refuse the CCP's staged tours and conduct an independent, comprehensive, and in-depth investigation.

The Falun Dafa Association and Clearwisdom have formed a "Committee to Investigate the Facts," which requested a comprehensive investigation of all labor camps, prisons, hospitals, and other relevant facilities where Falun Gong practitioners are detained. If the U.S. government hopes to learn the facts about the crimes in the CCP's concentration camps and against Falun Gong, they should undoubtedly join the committee, or provide them with necessary support and safety assistance. If the United States is sincere about ending this catastrophe of the human race, they should also be able to provide technical assistance, such as monitoring the transfer of large numbers of people in and out of labor camps in China.

“Shift the Focus of Investigation to All Labor Camps and Prisons”

“How to View Interference”